The USTA Florida Game Changer series examines the leading tennis industry products, tips and industry insights. USTA Florida members get first access to the information, and can share using the hashtag #GameChanger. Share your insight in the comment section below.

BETWEEN LAST WEEK’S ANNOUNCEMENT OF THE “ROGER FEDERER RACQUET,” and its line of the “Spin Effect Technology” racquets used by many of the top ATP and WTA tour players, Wilson Sporting Goods is on a bit of a run.

Last week Wilson announced that the racquet Federer uses will be available to the public later this year. Now known to the world as the Wilson Pro Staff RF97 Autograph (RF for Roger Federer), recreational players and Federer fans finally have the racquet they’ve been clamoring for, in both the authentic “Roger version” and a lighter “recreational player-friendly” version.

Wilson has even had fun with a series of three videos, under two minutes each, about the development of Roger’s racquet:

It was around this time last year that Federer, following a second-round loss at Wimbledon, began experimenting with a racquet with a larger head size — what was then a blacked-out (no paint job) Wilson prototype. Fans and the media were intrigued.

A couple months later, the Swiss had played with the prototype through the US Open and seemed committed to the new head size. That’s when Wilson started getting messages from tennis fans along the lines of, ‘Give us that racquet — now!’

“This is a great example of the synergy that exists between Wilson and the tennis community,” said Mike Dowse, Wilson Sporting Goods Co. president, after the announcement of the Wilson Pro Staff RF97 Autograph. “As a brand, we are committed to listening to the needs of our professional and recreational players.”

The Wilson Pro Staff RF97 Autograph is scheduled to hit stores on Oct. 1, 2014, and by the specs will be a control-oriented stick for advanced players who can produce a lot of racquet-head speed. The easier-to-swing version for recreational players, the Wilson Pro Staff 97, will be a full ounce lighter. 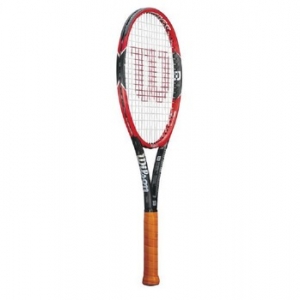 For veterans old enough to remember the Jack Kramer Autograph, introduced by Wilson in 1949, or the Chris Evert Autograph introduced in 1976, the Wilson Pro Staff RF97 marks the first “autograph” series racquet that Wilson has unveiled in nearly 40 years.

That by the way is also the answer to that bar trivia question you can impress your friends with: What is the best-selling racquet in tennis history? The sweet-swinging wooden Jack Kramer Autograph.

Federer and Serena Williams have long been the face of Wilson Spin Effect Technology, last year going undercover to promote the racquet line (see the Roger and Serena videos) that boasts greater spin without changing your strokes, allowing players to take bigger cuts at the ball with more control.

Serena and sister Venus Williams use the Wilson Blade, one of the racquets in the Spin Effect Technology line, along with fellow American Madison Keys, and ATP players Milos Raonic and Gael Monfils. The Wilson Steam, another in the line offering Spin Effect Technology is used by former Wimbledon champ Petra Kvitova, current world No. 3 Simona Halep, American Jamie Hampton and ATP player Kei Nishikori. Former world No. 1 Victoria Azarenka uses the Wilson Juice, another racquet in the line.

ATP player Grigor Dimitrov is probably the biggest poster boy for the Spin Effect Technology, currently sitting at a career-high No. 8 on the ATP Rankings, and attributing some of his success to his favorite Wilson Pro Staff 95S. 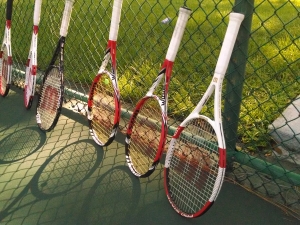 Once you find the right string tension, the Spin Effect Technology can feel like (and look like, if you’ve seen the powerfully slappy, dipping strokes of ATP pro Alexandr Dolgopolov) — well, almost cheating. Fewer cross strings in the Spin Effect Technology racquet design combine with more carbon fiber reinforcements in the frame to provide a giant string snap-back (69 percent faster) to launch the ball with more than three times the string movement, all resulting in an average of 10 percent more spin.

All told, the racquet line gives players an average of two inches (or more) additional net clearance on shots, and allows balls to drop 12 inches shorter into the court. That means that once you get a handle on the firepower, you can swing harder and still drop balls in the court, along with increased ball control.

So spin to win. Just as Babolat introduced a new era of power in the early 2000s, Wilson is offering recreational players a feel of what its like to spin the ball like the pros. Made in labs by rocket scientists that are now racquet scientists.

Tennis is not the easiest game to learn, and was even more difficult back in the day when you needed excellent technique and skill to hit winners with tiny-headed, power-challenged sticks. Now, with the help of the latest technology, you can simply string it up and start firing away like the pros

What is your take on the new Roger Federer racquet, the Wilson Pro Staff RF97, or the new spin technology? Share your take in the comment section below.