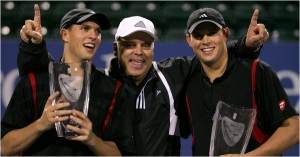 The USTA Florida Game Changer series examines the leading tennis industry products, tips and industry insights. USTA Florida members get first access to the information, and can share using the hashtag #GameChanger. Share your insight in the comment section below.

What should be done with USTA Professional Development?  If it was my say, it would be time for USTA PD to go.

They have overstayed their welcome.  No results.  No accountability.  Bad feelings everywhere.  Time to try something new.  Let the private sector have a chance without USTA meddling and top-down authoritarianism.

This is America for crying out loud.  Bottom up, not top down.  I like and respect the grossly-overpaid people on the USTA PD staff, I am just against this system that has never worked and never will work.  They have spent well north of $300 million.  Where’s the results?  Try that in the private sector and see what happens.

If USTA PD is to go on?  The philosophy needs to change.

History has shown that champions come from the ground up and not the top down.  Our greatest basketball players don’t come from a National Basketball Governing Body, they come from the streets — they play and learn at their local asphalt court.

The Beatles came from Liverpool, playing in their own garage and out on the street corner, not from being taught by the National Music Academy of England.  Wolfgang Amadeus Mozart became perhaps the greatest pianist and composer in history because he learned from his dad, who made the piano and music fun for him from age 3, and he was touring Europe playing concerts to packed royal halls at the tender age of 6.  Note that he was not brought along by the National Music Governing Body of Austria.  If he had been, the world would have never enjoyed the beautiful music of Mozart.  No doubt.

Brian Wilson the famed musical writing and arranging genius of the Beach Boys came from my Hawthorne High School.  Our musical director gave him an “F” for writing “Surfin’,” a song that the Beach Boys later recorded and it went on to sell millions of copies and led to their long and great and still-continuing musical legacy.

We cannot dictate greatness from on high.  Greatness is passionate.  It is creative.  It is enthusiastic.  It comes early.  And it is relentlessly dedicated to playing and practicing each and every day and playing tournaments every weekend and team matches every week.  Greatness learns from the past, but often does things in a new way.   Greatness does things that have never been done before.

Greatness is not cookie cutter.  It comes from Main Street, USA, not White Plains, NY.

I laugh to recall how five suits from USTA PD came out to Ventura County a while back and hosted a lunch meeting at a beautiful Westlake Village Hotel.  The speakers from New York gave us a splendiferous Powerpoint presentation with lots of graphs and pie charts about the brilliance of their new U10 Program that featured a bewildering amount of colored soft balls that would soon have hundreds of thousands — even millions — of youngsters flocking to the game.  There would be so many new juniors we were going to have to build more courts.

They told us how us hicks in SoCal had to coach and how we had to send our top players over to Carson when they became good.  They would take them from there.  White Plains was where the Wizard of Oz lived.  They knew everything.  We knew nothing.

When they wrapped up, they asked for questions from the audience.  There were some very unhappy local coaches in the audience who had some very pointed questions.

At the very end,  the coaches sorta looked over at me.  I had promised myself I would keep my mouth shut.  I couldn’t.  I had to bestir myself and I rose to my feet and thanked the suits — most of them friends of mine — for their dedication to tennis and for their mind-boggling presentation.

Then I said that 3/4ths of the United States Davis Cup Team grew up playing within 12 miles of this hotel.  “How many players on the US Davis Cup Team come from your White Plains area?  The next time you come out here, maybe you want to study what we are doing out here with our juniors and not tell us how we have to do it.  Not mandate to us.  Learn about the Junior Team Tennis program that originated here; learn about our Ventura County Junior Tennis Association which hosts some 35 incubator junior tournaments within a 50 mile radius and that said ‘Hell no’ to your Green Ball Mandate and we continue to offer regulation yellow ball tournaments to our U10s; our USTA SoCal series of tournaments and other solid junior programming; and the junior programs these hard working and dedicated and excellent coaches have at their clubs and parks and schools.”

Despite the millions upon millions the USTA spent on 10 and Under Tennis, we have fewer kids playing in the 10s than ever.  It has chilled U10 tennis in SoCal and across the country.  Would Andy Roddick have wanted to play with soft green balls?  The Bryan Brothers?  The Williams Sisters?

Parents ask me everywhere I go in my travels across the country, “Coach Bryan, my child is fired up about tennis and has been playing with yellow balls since they were six and now that they want to play tournaments as an 8 or 9 year old, should I have them go back to playing with soft Green Balls or play up in the 12s and get kicked by the bigger and older and more experienced kids?”

That is where the rubber meets the road and after all my years in junior tennis, college tennis and pro tennis, I have no answer to that Hobbesian Choice.

We have the Alice in Wonderland situation out here in SoCal now where lots of 10s are playing up in the 12s and the 12s don’t want to play the 10s so they play up in the 14s.

We have the situation where young players play with regulation balls all week in their workouts and practice matches and then when they go to their U10 Tournament on the weekend, they are forced to play with soft Green Balls.

More and more I am hearing of parents simply taking regular balls and asking the opponent if they would rather play with them.

Is this any way to run a railroad?

We have fewer men and women in the Top 100 in the world than ever.  We have fewer America kids playing college tennis than any time in our history.  USTA PD, despite huge salaries for our  execs and coaches, despite millions of dollars being spent, has been spectacularly unsuccessful.

If we’re going to move forward with USTA PD we need to:

To reiterate, governing bodies should not be involved in coaching.  The USTA should be our main frame computer.  Private coaches and parents should be our software.  Governing bodies do not create champions.  Never have, never will.  They stifle creativity and enthusiasm and all the things that are the basic DNA of champions.

In the end, I say get rid of USTA PD altogether.  After spending over $300 million on USTA PD with one regime after another and mandate after mandate and minefield after minefield with nothing to show for it, it is time to go in a completely new direction.  Like John Lennon sang, “All we are saying, is give peace a chance.”  All I am saying is, give the private sector a chance.

What is your take on the future of USTA Professional Development? Share your opinion in the comment section below.