The USTA and United States Davis Cup Captain Jim Courier today announced that top-ranked American and world No. 20 John Isner, world No. 45 Donald Young, and the world’s No. 1 doubles team of Bob Bryan and Mike Bryan will represent the U.S. in the 2015 Davis Cup by BNP Paribas World Group First Round at Great Britain. The best-of-five match series will be played on an indoor hard court at the Emirates Arena, March 6-8, in Glasgow, Scotland.

Looming is a potential all-brothers meeting between Bob and Mike Bryan and Andy and Jamie Murray. Play begins each day at 1 p.m. local time (8 a.m. ET).

The U.S.-Great Britain rivalry is the oldest in Davis Cup history, dating to the first competition in 1900. The two countries last met in January 2014, in a World Group First Round tie played on a clay court in the left field of San Diego’s Petco Park, marking the first time Davis Cup had been played in an open air baseball stadium. Murray led Great Britain to a 3-1 victory in that match-up. The U.S. is 11-8 all-time against Great Britain and had won the last four Davis Cup ties against the Brits prior to 2014. The U.S. holds a 214-68 overall record in Davis Cup play.

The winner of this tie advances to the World Group Quarterfinal, July 17-19, and will face either France or Germany. Should the U.S. defeat Great Britain, it will travel to Germany or host France. The losing nation will compete in the World Group Playoff, Sept. 18-20, for the right to play in the World Group in 2016.

Young will be making his second appearance for the U.S. Davis Cup team. He made his Davis Cup debut in the World Group Quarterfinal against Great Britain in San Diego last year, where he lost to Andy Murray.

Bob and Mike Bryan hold a 22-4 doubles record together in U.S. Davis Cup competition; the 22 wins are first all-time in U.S. Davis Cup history for a tandem. Bob and Mike, the only brothers to pair in victory for the U.S. Davis Cup team, hold the all-time Open era record of most Grand Slam men’s doubles titles (16) and ATP doubles titles (104). In addition, the Bryan brothers won the gold medal in doubles at the 2012 Olympics in London, where they completed a career Golden Slam by winning all four Grand Slam titles and an Olympic gold medal. The Bryans ended 2014 as the No. 1-ranked doubles team in the world for a record 10th time.

Courier announced the practice partners for the U.S. Davis Cup team: 17-year-olds Stefan Kozlov and Francis Tiafoe. Kozlov reached the junior boys’ final at both Wimbledon and the Australian Open in 2014, as well as the quarterfinals at the US Open and French Open juniors. Tiafoe last year peaked at No. 2 in the ITF World Junior Rankings and reached the boys’ semifinals at the 2014 US Open junior tournament. Tiafoe won the prestigious Orange Bowl International Tennis Championships in December 2013 in Plantation, Fla., becoming the youngest boys’ champion in the 67 years of the event.

Orlando’s Beltrame was named PTR Member of the Year for Florida, presented to a PTR member who has shown dedication and diligence in promoting and supporting tennis and PTR. Throughout his coaching career, Beltrame has worked with dozens of ATP and WTA
tour professionals, including Jim Courier and Pete Sampras. He has traveled extensively coaching players in major events including the four Grand Slams, Davis Cup and Hopman Cup.

Since 1996, Beltrame has served as director of tennis and athletic performance coaching at the Human Performance Institute in Orlando, Florida. Prior to joining HPI, he was responsible for developing and running high performance programs at Club Ambrosiano, one of the most prestigious clubs in Milan, Italy.

Beltrame is a registered coach of the WTA tour, holds both USPTA Master Professional and PTR Professional certifications, and is certified as Maestro by the Italian Tennis Federation. He is also an ACE-certified personal trainer, and a USTA specialist in competitive player development. He was awarded the Coach of the Year and “Doc” Counsilman Science Award by the United States Olympic Committee.

Saviano, whose Saviano High Performance Tennis is located in Plantation, Fla., received the PTR Jim Verdieck Touring Coach of the Year Award. A PTR International Master Professional, Saviano is recognized as one of tennis’ top developmental coaches and coaching educators.

Saviano was in the spotlight last year as Eugenie Bouchard made her way through the Grand Slams, and was named the WTA 2014 Most Improved Player of the Year. He is currently working with American Sloane Stephens.

Saviano served as the USTA’s director of coaching for men’s tennis, director of coaching education & sport science, and national coach. He was named the United States Olympic Committee (USOC) Developmental Coach of the Year and USTA Florida Section Developmental Coach of the Year. In 2007, he received the Tennis Canada Coaching Excellence Award. Both a PTR International Master Professional and USPTA Master Professional, Saviano is also the author of Maximum Tennis. 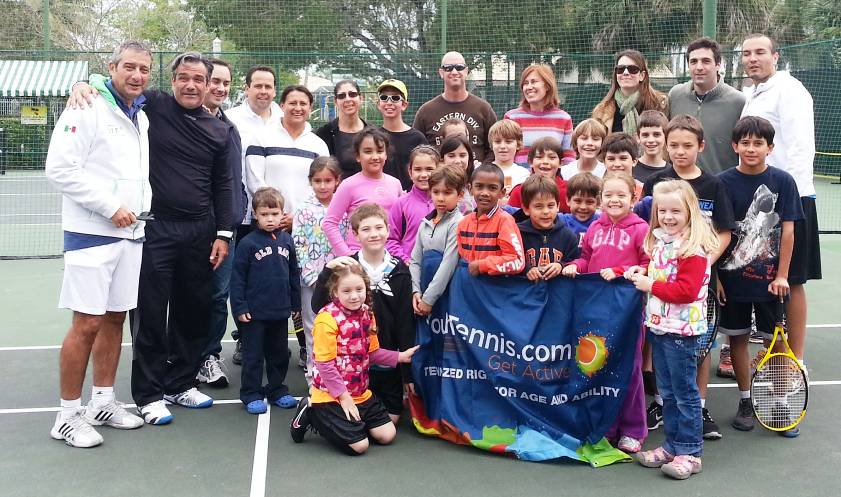 “March 10th is World Tennis Day, and to celebrate there will be three great events held during that weekend — one in London, the other in New York featuring Gabriela Sabatini vs. Monica Seles followed by Roger Federer vs. Grigor Dimitrov,” says organizer Gustavo Granitto. “The third one, keeping the tradition since 2012, will be held at GTC Tennis in Pembroke Isles, the venue of our Tenis Para Todos (Tennis for Everyone) program.”

Whole families, kids and adults are encouraged to participate in the Match 7 event. To register come by the GTC Tennis clubhouse or e-mail gusg@gtctennisconsultancy.com by March 5 at 5 p.m.

“So kids, youth, parents, ladies, all be ready to attend and participate,” Granitto says. “We will be having different activities and competition formats, and a lot of fun!”

Play events are organized by skill level, and kids have the chance to gain additional play experience through a rotation of opponents and short, continuous matches over a two- to three-hour period. Play events promote a sense of achievement for youth through a fun and spirited atmosphere.

“World Tennis Day is a wonderful platform to inspire healthy and active lifestyles for families throughout the country,” said Kurt Kamperman, USTA chief executive, community tennis. “The thousands of USTA Tennis Play Events in celebration of World Tennis Day are part of USTA’s continued commitment to provide opportunities to bring more kids and their families into the game.”

For more info or to register for the World Tennis Day in Pembroke Isles event, e-mail gusg@gtctennisconsultancy.com.

To learn more about USTA Florida Play Events in March go to www.USTAFlorida.com/Events.

The USTA Pro Circuit $25,000 Women’s Tennis Tournament at Innisbrook on March 23-29, 2015, in Palm Harbor, Fla., will in addition to top-level professional tennis feature a number of USTA community events:

In last year’s final, teenager and former US Open juniors champion Grace Min captured the singles championship in the All-American final, defeating former NCAA champion Nicole Gibbs 7-5, 6-0. It was the second Innisbrook title for Min, who also won in 2012.

For more information call the tennis center at (727) 942-5241 or e-mail tennis@playinnisbrook.com.