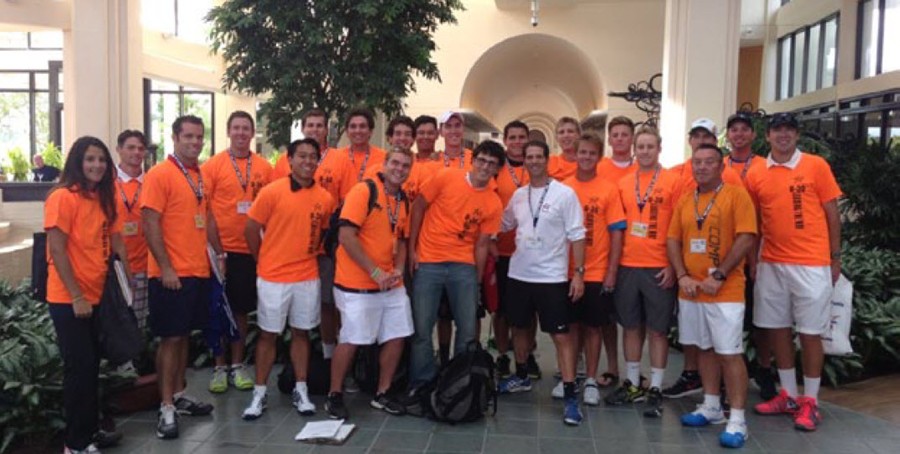 “The money will be allocated to help our young professionals participate in more workshops and conferences in 2015,” says USTA Florida Director of Competitive Tennis Jason Gilbert, who also heads the U30 effort. “In 2014 we had record numbers at our USPTA Florida Division Convention due to the 34 under-30s that participated.”

USTA Florida in 2014 supported the U30 effort with a $5,000 grant in addition to regional education days, specific U30 workshops, and attendance assistance for the USPTA National Convention in New York. Last year USTA Florida also piloted the U30 Slam Series with under-30 Grand Slam-themed events in Naples, Tampa and Orlando.

“In 2015 we’re looking at mainly the same events as 2014, plus any other specific workshops we feel would benefit the U30 professionals such as a possible Florida U30 summit,” Gilbert says. “We’re very excited about having a big presence at this year’s USPTA National Convention in New Orleans. This is also the second year at our USTA Florida Annual Meeting where we had more than 20 of our U30 professionals participate.”

For more info on the U30 movement in Florida go to www.usptaplayer.com/club/U30, or to learn about U30 in other U.S. regions go to uspta.com.

FSUAs part of the largest programming push in collegiate tennis, Florida State will feature in five matches broadcast this spring on ESPN3.

The five home matches that will air include in-state rivals Florida (Feb. 6) and Miami (April 3), ACC rival Clemson (March 22), and both parts of a double-header against Stetson and Florida Atlantic (Feb. 20). No. 13 Florida and No. 24 Clemson both reached last season’s NCAA Tournament.

Florida State continues to be a national leader in televised matches. Last season, during the USTA College Matchday, the ‘Noles were on national television against Oklahoma. This past fall, ESPN3 worked with Florida State to deliver 12 hours of coverage of the USTA Collegiate Clay Court Invitational at the ESPN Wide World of Sports in Orlando, Fla.

“When the USTA heard that Florida State was going be on ESPN3 five times this year, we knew this is the leadership and the direction college tennis needs, so congratulations to the FSU team and ESPN for getting this done,” USTA Senior Director of Collegiate Tennis Virgil Christian said. “To be able to watch their matches against Miami, Florida and Clemson is going to be great for the college tennis fan.”

In August, the new ITA format for Division I tennis was announced that includes no-ad scoring and changing doubles matches to one set of six games, helping the sport fit into TV windows to help the growth of the sport and increase exposure throughout the country.

FSU opened the season 3-0 Saturday and Sunday in the Seminole Tournament.

Scholarship opportunities are now open for high school seniors across the U.S. who participate in organized youth tennis programs.

The following scholarships are available:

The deadline for application is Feb. 6, 2015. Top candidates will be selected by Feb. 20, 2015 and notified via email to provide additional information. Applications must be submitted via the USTA Foundation, Inc. online application link.

To apply or for more info go to www.ustafoundation.com/grants_scholarships/college.

The Top 5-ranked American tennis players and two international former or currently reigning Grand Slam champions are among the field of 32 players who will compete in the upcoming Delray Beach Open by The Venetian Las Vegas, as the ATP World Tour event announced its singles field on Thursday.

Sam Querrey, Steve Johnson, Jack Sock and Donald Young have joined No. 1 American John Isner, who announced in November he would play in the 23rd annual tournament.

The 10-day event, which includes a three-day ATP Champions Tour event over President’s Day weekend, takes place Feb. 13-22 at the Delray Beach Stadium & Tennis Center. The event is the only one of its kind in the world that includes ATP Champions Tour and ATP World Tour events at the same venue in the same week.

Also in the field is veteran Ivo Karlovic, a 2010 Delray Beach finalist who is second all-time among ATP World Tour servers with more than 9,000 career aces; young up-and-coming Australian Bernard Tomic and compatriot Marinko Matosevic, a Delray Beach finalist in 2012; and 2004 Delray Beach doubles champion Radek Stepanek, who also has a pair of Grand Slam doubles titles to his credit.

For more info go to www.YellowTennisBall.com