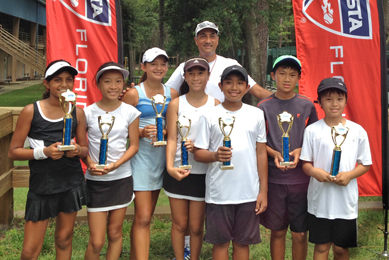 USTA Florida has announced its new series of Team Tennis Challenges for youth players ages 7-18 across the state. In 2015, these fun team events will be hosted as two independent series: with four events scheduled in South Florida this spring, and four more events scheduled for the fall in North Florida.

The events are “BYOT” (bring your own team), and teams do not have to have prior participation in a local league to participate. USTA members and non-members can participate. All participants will receive lunch on Saturday during the event. Facilities and coaches who bring teams to these events will receive special incentives.

“The new USTA Florida Team Tennis Challenges offer fewer restrictions, allowing more teams to participate,” said USTA Florida Associate Executive Director Andy McFarland. “They also give players who are not yet USTA members the opportunity to experience our events and programs, while offering a clear value proposition for our junior members.”

Registration is now open for the four spring Team Tennis Challenge Series events. The cost for early registration for each event is just $25 for USTA members and $35 for non-members. Prices will increase two weeks prior to each event.

The competition is divided into age groups 10-under, 12-under, 14-under, and 18-under. There are novice, intermediate and advanced divisions within each age group.

Novice divisions will offer gender-blind teams (example: a team can enter a novice division with 3 boys and 1 girl, or a team can include all of one gender). Players are allowed to “play up” a maximum of one age division, except for participants age 10-under. Teams can participate in multiple USTA Florida Regional Team Tennis Challenge events.

USTA Florida is offering tennis balls, court lines and cash incentives for facilities and/or coaches who bring multiple teams to a single event: 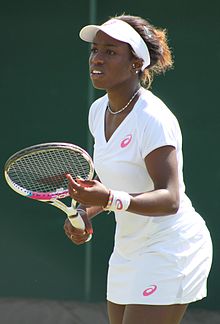 Miramar teen Sachia Vickery won her second USTA Pro Circuit event of the year over the weekend, defeating Spain’s Sara Sorribes Tormo 6-2, 2-6, 6-3 in the final of the City of Sunrise Pro Tennis Classic in Sunrise, Fla.

Vickery trailed 1-3 in the third set before running off five straight games for the championship. It was the 19-year-old’s second USTA Pro Circuit title of 2015 following the Plantation Community Open Challenger last month where he defeated friend Samantha Crawford in the final.

“It was an exciting final played like a chess game by both players,” said Tournament Press Aide Rick Marcotulli. “Sachia played better on some key points during the third set.”

In the semifinals the No. 7-seeded Vickery was stretched to three sets by Russian qualifier Natalia Vikhlyantseva. The unseeded Sorribes Tormo did not meet a seeded player en route to the final, in the semis rolling over Russian Darya Kasatkina 6-0, 6-0.

The Gainesville Area Community Tennis Association in Gainesville, Hebni Nutrition Consultants, Inc., in Orlando, and TEAM First PAL (Palm Beach Area Tennis Patrons) were among 44 organizations awarded $741,500 in grants from the USTA Foundation, the national charitable organization of the USTA.

The rewarded organizations were recognized for their efforts in providing tennis and education to under-resourced youth and individuals with disabilities, as well those organizations with a need for program infrastructure support.

“The USTA Foundation is honored to recognize such outstanding organizations around this country, which greatly impact so many deserving students, children in need and the communities in which they live,” said Dan Faber, executive director, USTA Foundation. “Their amazing work makes a difference in thousands of lives across the country and truly inspires us all.”

The Gainesville Area Community Tennis Association promotes, encourages and fosters the development and growth of the sport of tennis in the Alachua County area. Their programs include the Aces in Motion after-school program, Middle School Tennis and Adaptive Tennis. For more info go to www.GainesvilleTennis.org/gacta-programs.

The target audience for Hebni’s services are populations who are at risk for obesity, heart disease, diabetes and hypertension, offering after-school tennis for children and other programs. Hebni is committed to improving consumer’s health by providing comprehensive nutritional information to culturally diverse populations through strategic education programs. For more info go to www.SoulFoodPyramid.org.

Tennis Education And Mentoring First — Police Athletic League (TEAM First-PAL) in Palm Beach is a not-for-profit organization that uses the game of tennis to positively impact the lives of at-risk youth. It provides tennis instruction, educational programs and mentoring opportunities with law enforcement that inspire and empower. For more info go to www.TeamFirst.org/#!mission/c1lwu.

Combined with previously awarded grants and scholarships, this latest grant funding brings the total awarded by the USTA Foundation in 2014 to more than $2.3 million. To date, USTA Foundation has awarded more than $19 million in grants and scholarships to hundreds of programs, benefiting thousands of children and adults through tennis, education and health programming, primarily through the NJTL network, and also through efforts to military personnel, veterans and individuals with disabilities.

For more info go to www.USTAFoundation.com.

Sessions will include Doubles for College Preparation; Group Dynamic Warm Up and Games; Singles Drills for Each Pathway of High School Tennis; Are You Using All The Tools Available to YOU?; Games, Games & Games for Each Pathway; and more.