Jr. Tennis Profile: Opelka, Not a Fan of Grass, Turns at Wimbledon 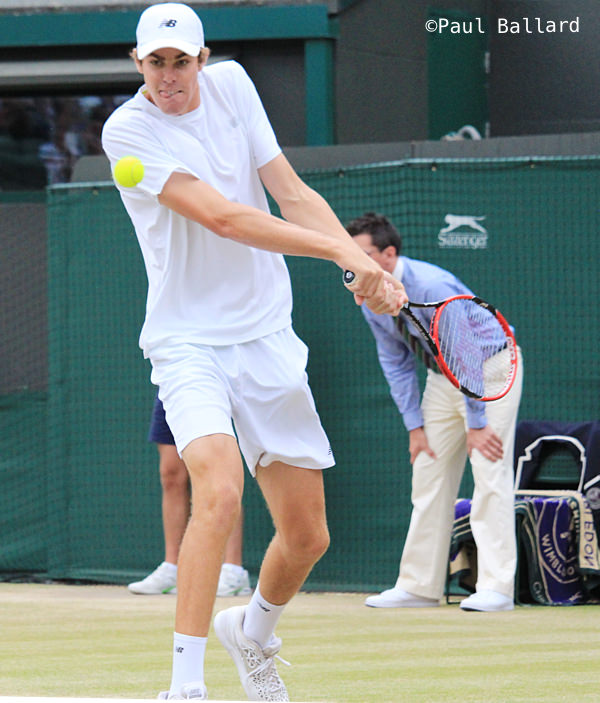 Reilly Opelka, unseeded and competing in his first Wimbledon, was far from a favorite last week in the Junior Championships at the All England Lawn Tennis Club. That didn’t stop the Palm Coast resident however, as he captured the boys singles title with a 7-6(5), 6-4 victory over Mikael Ymer of Sweden.

The 6-foot 10-1/2 17-year-old has always declared clay his best surface, although his lack of exposure to grass may have played a role in that choice.

“At first I wasn’t the biggest fan of [grass], but I’m liking it more and more,” said Opelka, who was a quarterfinalist at last month’s French Open Junior Championships. “It just takes time to get used to.”

By reaching the semifinals at the International Tennis Federation’s Grade 1 in nearby Roehampton the week before the Wimbledon Junior Championships, Opelka was able to get his first real competitive experience on the surface, and was pleased with his form coming into the tournament. But he was forced to overcome a match point against Australian qualifier Alex De Minaur in his 4-6, 6-3, 13-11 first-round win.

“That was just kind of one of those days where you have to get through it,” said Opelka, who is coached by Diego Moyano at the USTA’s Boca Raton National Center and also worked with Tom Gullikson from an early age. “It was ugly from the first point.”

Opelka defeated No. 3 seed Corentin Denolly of France in three sets in the second round and No. 10 seed William Blumberg of the United States in the quarterfinals. His win over Blumberg, the first in their three ITF junior meetings, set up a semifinal with world junior No. 1 Taylor Fritz of the United States. In front of a large Court 18 crowd, Opelka avenged a recent Futures circuit loss to the top-seeded Californian, beating him 6-3, 7-6(13).

In the final, played on Wimbledon’s famous Court 1, Opelka did not face a break point.

“I feel like I served well in big moments,” said Opelka, who also reached the doubles final with Japan’s Akira Santillan. “Like 30-all and deuce, I came up with a service winner or an ace almost every time, which takes a lot of pressure off me.”

Opelka’s father, mother and sister were in London all week supporting him, but they had scheduled their flights back to Florida for Saturday. Those plans were rearranged after Opelka’s win over Fritz, so when he had secured the title, Opelka could joke about their projection that he would be out of the tournament before the final weekend.

“They really weren’t believing in me,” Opelka said with a smile. “They just didn’t have confidence, I guess.”

Opelka, who signed with the Lagardere sports management agency in April, is planning to play the USTA 18s Nationals in Kalamazoo next month and the US Open Junior Championships in September. 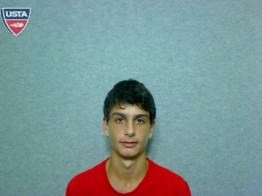 Top-ranked 16-year olds Sam Riffice and Oliver Crawford, along with Junior Davis Cup champion Gianni Ross, headline the eight junior boys selected for the 2015 Team USA National Junior Team, a training program designed to give a collection of America’s best young players opportunities to train together during the summer and travel to play against top junior competition from around the world. The girls’ team was selected in May.

Players were selected for the team based on automatic qualifying criteria or through results in a qualifying playoff held this at the USTA Training Center in Boca Raton, Fla., in early July.

USTA Player Development will provide coaching and travel assistance to select events throughout the summer, such as the junior US Open and the USTA Boys’ 18s and 16s National Championships in Kalamazoo, Mich.

“All eight boys have tremendous potential and are on track to become good players,” said USTA Player Development General Manager Martin Blackman. “What is most encouraging is the relationship that we have developed with their primary coaches. Our National Coaches Sylvain Guichard and Jay Devashetty have done a great job of managing and cultivating the relationships. The primary coaches of these players are among the best in the country and are the type of coaches we need as partners in our mission to develop world-class players.”

Tampa’s Kirkov, the No. 2-rated prospect in the Class of 2018 on TennisRecruiting.net, reached the 16s semifinals at both the Orange Bowl and Eddie Herr last December. Boca Raton’s Rotsaert won his first two ITF junior singles titles this year, in May at the Grade 4 Metropolia Open in Coral Gables, Fla., and in June at the Grade 3 Bytom Cup in Poland, while Boca Raton’s Howells won several ITF-level junior doubles titles last fall.

The USTA Foundation, the national charitable organization of the United States Tennis Association (USTA), announced that it has partnered with longtime US Open sponsor JPMorgan Chase & Co. to award 10 National Junior Tennis and Learning (NJTL) chapters with $10,000 each.

This is the second consecutive year of the partnership, with the donated money to go toward year-round tennis and education programming. JPMorgan Chase will also once again launch a Twitter campaign to award one of the 10 NJTL chapters with an additional $10,000.

One of the 10 NJTL chapters receiving funding is the MaliVai Washington Youth Foundation in Jacksonville, Fla.

#ReturnTheServe, JPMorgan Chase’s twitter campaign, began on July 10, the birthday of NJTL co-founder Arthur Ashe. The NJTL chapter that secures the most mentions will receive the additional $10,000. The campaign will conclude Aug. 14 and the winning program will be announced on Friday, Aug. 21. For more information, visit Chase.com/USOpen starting on Monday, July 20.

In January 2014, the USTA Foundation combined with USTA NJTL, a national network of 513 community-based tennis and education programs serving more than 225,000 youth, to become a fully-operational foundation.

“The National Junior Tennis and Learning network is doing great work by giving kids access to tennis who would not otherwise have a way to play,” said Kristin Lemkau, chief marketing officer for JPMorgan Chase. “They are not only instructing them on the fundamentals of the sport and how to have fun, but the importance of education as well. This opportunity will surely create a pipeline of athletes and future leaders to come.” 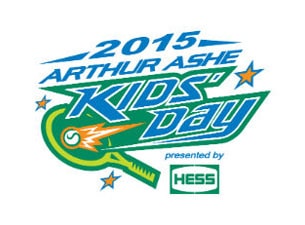 A star-studded line-up will be featured for the milestone 20th annual Arthur Ashe Kids’ Day presented by Hess prior to the 2015 US Open in New York.

They’ll team-up with tennis superstars Novak Djokovic, last year’s US Open champion Marin Cilic, and more for a day of tennis, music and fun to honor the legacy of legendary pioneer Arthur Ashe. The annual event takes place Saturday, August 29, at the USTA Billie Jean King National Tennis Center in Flushing Meadows, NY, from 9:30 a.m. to 4 p.m to kick-off the 2015 US Open, which runs from Aug. 31-Sept. 13.

“It’s an historic occasion for Arthur Ashe Kids’ Day, as we mark two decades of bringing the best in tennis and music together on a truly special day for families,” said USTA Executive Director and Chief Operating Officer Gordon Smith. “The event also captures the spirit and vigor of Arthur Ashe and is a fantastic way of encouraging youth to be active in tennis and life, while developing healthy habits early on.”

The AAKD Grounds Festival offers a wide range of interactive activities and the opportunity for children of all ages to test their skills, hit with top tennis pros, win prizes and enjoy music. Activities include the Hess Festival Stage, the Family Fun Court, the Hess Toy Truck Obstacle Course, Hess Target Time, Xerox Beat the Pro, 10 and Under Tennis courts, Nike Tennis and skill activities, Esurance Champions of the Court doubles challenge, the Tennis and Education Zone, the Coca-Cola Get Fit and Play challenge, IBM Speedzone, Wilson Burn Challenge, The US Open American Express Fan Experience, and more.

Proceeds from Arthur Ashe Kids’ Day benefit the USTA Foundation which helps fund the National Junior Tennis & Learning Network (NJTL), a nationwide group of more than 500 nonprofit youth-development organizations that provide free or low-cost tennis, education and life-skills programming to more than 225,000 children each year, founded 45 years ago by Arthur Ashe, along with Charlie Pasarell and Sheridan Snyder.

For more information on Youth Tennis and Arthur Ashe Kids’ Day, log on to www.YouthTennis.com and/or www.AAKD.com. Stadium show tickets are on sale now through Ticketmaster (1-866-OPEN-TIX), and at www.usopen.org.