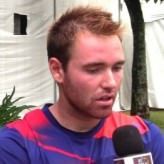 “Hopefully, I won’t be back here next year,” Fratangelo told the crowd during the awards ceremony, referring to his desire a year from now to have enough ranking points to compete only at ATP-level events.

The final was Fratangelo’s third match in 30 hours after his Friday quarterfinal match was rained out. On Saturday he beat both fellow American Frances Tiafoe in three sets and American Denis Kudla in the semifinals in straight sets.

The doubles final was won by Americans and former Savannah Challenger singles champions Ryan Harrison and Brian Baker, who came from a set down to defeat India’s Purav Raja and Divij Sharan 5-7, 7-6 (4), 10-8.

The USTA announced the 24 players who will represent the United States at the ITF Young Seniors World Team Championships, the senior equivalent of tennis’ Davis Cup and Fed Cup international team competitions. The American athletes will be competing against players from 30 other countries.

The ITF Young Seniors World Team Championships is the highest-ranked event on the ITF Seniors Circuit for male and female players in the age categories of 35-45, and will be held from May 1-6 in Umag, Croatia.

To see the full list of teams go to www.usta.com/Adult-Tennis/USTA-Adult-Senior-Tournaments/Senior-International/us_teams_announced_for_itf_young_seniors_world_championships. 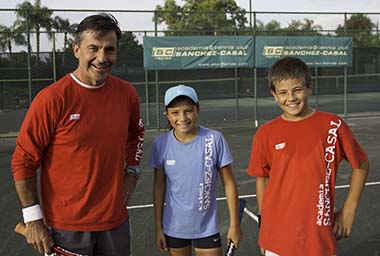 A Kid’s Day will be part of the festivities when Academia Sanchez-Casal in Naples hosts its second USTA Pro Circuit event of the year, the $25,000 ASC Florida Women’s Open, on May 8-15, 2016.

Kid’s Day will be held on Saturday, May 14, with festivities from 9-10:30 a.m. for children age 10 and older. Participants will receive a free t-shirt.

“Kid’s Day is a great way to get your whole family active and to introduce your kids to tennis and its life-long benefits,” says academy founder and former ATP pro Emilio Sanchez. “It’s also an opportunity to meet professional tennis players while attending free tennis clinics taught by ASC-certified coaches.”

The ASC Florida Women’s Open is the second USTA Pro Circuit event at the ASC tennis academy this year and has attracting players from 20 different countries. The tournament is free and open to the public, with restaurant and happy hour services available.

With approximately 90 tournaments hosted annually throughout the country and prize money ranging from $10,000 to $100,000, the USTA Pro Circuit is the pathway to the US Open and tour-level competition for aspiring tennis players and a frequent battleground for established professionals. Last year, more than 1,000 men and women from more than 70 countries competed in cities nationwide. John Isner, Maria Sharapova, Sam Querrey, Sloane Stephens, Kei Nishikori, Victoria Azarenka and Andy Murray are players who began their careers on the USTA Pro Circuit. 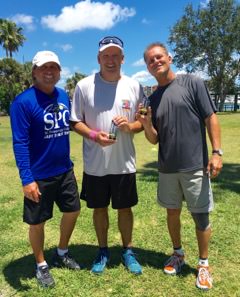 Area players battled it out in a one-day tournament format when the 2nd annual Treasure Bay Tiebreak Tournament was held on April 23, 2016 in Treasure Island, Fla.

Players in divisions 50-and-over and NTRP 3.0-4.0 competed in singles best-of-three 10-point tiebreaks in a round robin format, with each competitor playing 3-4 matches.

“The average match lasted 40 minutes, but some of the closer ones went an hour,” said Tournament Director and Director of Tennis/Facility Director Philip Girardi of Treasure Bay Golf and Tennis. “Players were put in groups and played a round-robin format. Matches ranged from 25 points to 71 points played.”

Tiebreak Tournaments are the perfect format for tennis players looking for competition, without having to spend an entire weekend at a tournament. Tournaments generally take 4-5 hours or less depending on the number of entrants, and matches generally consist of best two-of-three 10-point tiebreaks. Tiebreak Tournaments include seeds and draw sheets (main draw and consolation), and matches typically last only 30-35 minutes each.