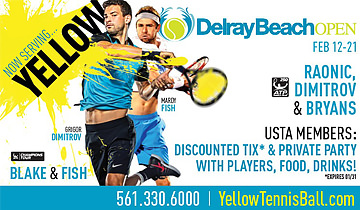 Former US Open champ Juan Martin del Potro, making his 2016 debut on the ATP World Tour after wrist injuries, will play in the featured Tuesday night match at the Delray Beach Open following the tournament withdrawal of Milos Raonic.

The world No. 11 Raonic informed the tournament that an injury sustained at the Australian Open will keep him from playing next week.

“I’m disappointed that I won’t be able to make my debut in Delray Beach on Tuesday,” said Raonic, who suffered an adductor injury in Melbourne. “I heard that there would be great support from Canadians in the area, so I hope to be able to play in Delray Beach next year.”

The 10-day Delray Beach Open kicks off this Friday, Feb. 12, first with the three-day ATP Champions Tour, and then the ATP World Tour event which is scheduled for Monday, Feb. 15 through Sunday, Feb. 21.

Also withdrawing from the tournament was former world No. 2 Tommy Haas, who is still recovering from shoulder surgery.

“Unfortunately we came to the conclusion that I am not fit to play in Delray this year,” said the 37-year-old Haas. “I really tried hard to make it and be ready.”

Del Potro will be playing his first match in nearly a year due to a series of wrist injuries that sidelined the former world No. 5. His first-round opponent in the 32-player tournament will be determined this Friday evening when the tournament releases its 2016 draw. The Argentine won the 2011 Delray Beach title in his only appearance in the event.

For ticket info go to www.yellowtennisball.com/tickets.

What better way to rally the family to the local tennis courts than with an event everyone can play?

Orlando and Port Orange, Fla., (just outside Daytona Beach) kicked off the first week of February with new Family Red Ball Tournaments. Picture players age 5 to 55+ all rallying together with the slightly larger and lower-bouncing “red ball” on 36-foot courts.

“The Red Ball Tournament provided us with a great afternoon for family fun and bonding time, as well as an opportunity for us to meet and make new friends,” said a parent from the Port Orange event at Airport Park, which features permanent 36-foot courts. “We’re looking forward to the next family event!”

“The courts were filled to capacity with children, parents and grandparents playing together in doubles red-court action,” she said of the event which benefited the Spruce Creek High School tennis program. The afternoon also included face painting, a spirited dance contest and a raffle for tennis prizes.

The Orlando event was hosted by the Lake Cane Tennis Center, offering players age 8-and-under and their families a chance to take the court together.

“These L9s, formerly called ROGY events, are great because they provide the opportunity for tournament directors to be creative with their formats, like this event,” said USTA Florida Entry-Level Tournament Coordinator Thad Hawkes. “Utilizing modified courts and equipment, events like these provide the opportunity for players to have fun whether it’s with kids their own age or with their parents.

Also, once parents see how easy it is to set up these nets and play with the lower-compression balls themselves, you could certainly see them playing in their driveways, neighborhood cul-de-sacs and more.”

The theme for the Family Red Ball Tournament was “Prior Experience Not Required,” as the kid-sized racquets and red balls had parents and grandparents who had rarely picked up a racquet before rallying with their children and grandchildren. With modified scoring the teams played first to seven points, using clothes pins on the side of the mini-nets to keep score.

“Big smiles and gracious, fun play made this an event to remember,” said Hawkes of the tournament where no win-loss results were tallied.

“The USTA is focusing on family tennis opportunities, and Rita, Hoku and Lake Cane Director of Junior Programs Susie Rahimitabar have taken that concept and run with it. From their great successes, this is only the beginning of creating more opportunities for families to play together.”

The 24th Avila Charity Tennis Tournament, benefiting the charity “Starting Right, Now” will be held on April 8-10, 2016, at the Avila Tennis Club in Tampa, Fla.

Starting Right, Now, is a non-profit organization in South Tampa with a mission to end homelessness for youth through one-on-one mentoring, providing a stable home, obtaining employment, teaching financial literacy and life skills, and by promoting educational achievement.

The deadline to register is Saturday, April 2, at 5 p.m. Draws will be posted Monday, April 4.

For more info or to register go to http://avilacharitytennis.com/ 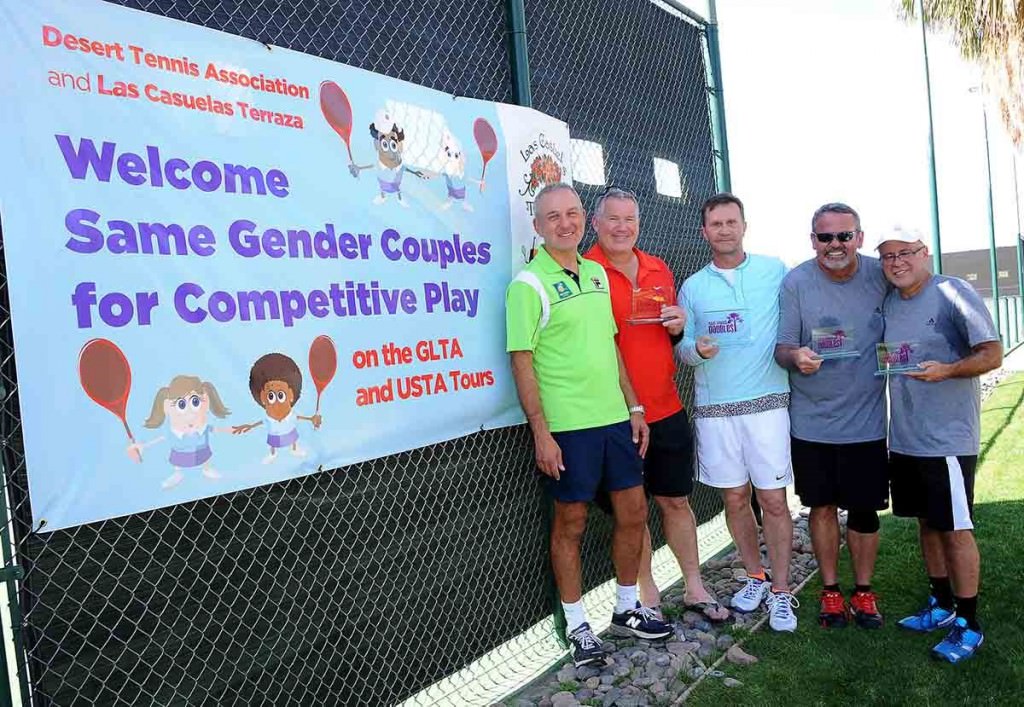 “We were thrilled at the success of last year’s inaugural event, and sincerely hope that giving the event national championship status will allow it to continue to grow and attract even more same-gender couples to competition,” said USTA Chairman of the Board, CEO and President Katrina Adams. “Tennis once again has stepped to the front to break down barriers and ensure that our sport is inclusive and welcoming to all.” 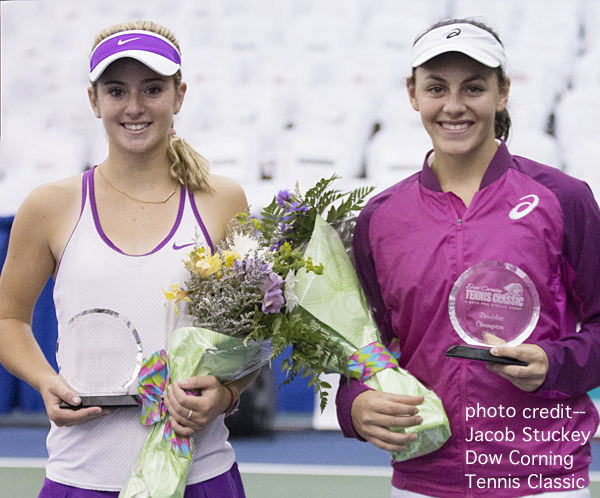 Making the most of a doubles wild card into the $100,000 Dow Corning Tennis Classic, a USTA Pro Circuit event, Florida teens CiCi Bellis and Ingrid Neel defeated the top three seeds en route to the title at the Great Midland (Mich.) Tennis Center earlier this month.

The 16-year-old Bellis, who had one USTA Pro Circuit doubles title to her name at a $10,000 level tournament, now lives and trains in Boca Raton, while the 17-year-old Neel, who had won two $10,000 level doubles titles and one earlier this year at the $25,000 level, has lived in Bradenton for the past four years.

After playing a few low-level ITF Junior events several years ago, Bellis and Neel had not teamed up again until Midland, their first USTA Pro Circuit partnership. They defeated top seeds Maria Sanchez and Asia Muhammad 6-1, 6-2 in the quarterfinals, No. 3 seeds Nicole Gibbs and Taylor Townsend 3-6, 6-3, 10-6 in the semifinals, and No. 2 seeds Noami Broady of Great Britain and Shelby Rogers 6-2, 6-4 in the final.

Bellis and Neel were beneficiaries of the coaching expertise of Lisa Raymond, the former University of Florida star who won 11 slam doubles titles during her career. Raymond, who has recently agreed to a coaching arrangement with Bellis, was in Midland to coach Bellis and the future Gator Neel, who will begin her collegiate career in Gainesville this fall.

Although this was the most impressive title of her career, Neel has already claimed a win at the sport’s highest level. As the 2015 USTA Girls 18s National doubles champions, Neel and Tornado Alicia Black received a wild card into last year’s US Open women’s doubles draw, where they defeated Yulia Putintseva of Kazakhstan and Danka Kovinic of Montenegro before falling in three sets to No. 7 seeds Andrea Hlavackova and Lucie Hradecka of the Czech Republic.