Blackman in his introductory press conference touched on a number of topics, from juniors playing on teams, juniors in the U.S. pipeline, to leaving and returning to the USTA, public and private sector coaching, attracting top young talent to tennis, the Slam drought in American men’s tennis, and going college vs. pro tennis, among others.

Here were some of the top points from an introductory press conference:

Why did you leave the USTA in 2011?
Blackman: In 2011, it was kind of the end of the first phase in RTC [USTA Regional Training Centers] rollout. I thought we did a great job kind of piggybacking on the work of Jose Higueras, under Patrick’s [McEnroe’s] leadership, partnering with some of the best programs in the country. I wanted to kind of take that time in my career and start a program, kind of go back into the private sector. That was something I always wanted to do, and I thought that was the right time after we had finished the first part of the job with the regional training centers.

What, in your experience, as a private coach in the past three or four years have you learned about interacting with the USTA and how do you think that’s going to help you going forward?
I mean, so much. Being in the trenches over the last four years and being on court six to eight hours a day with kids ages 8 to 18. I think the first thing that I noticed when I went back into the field was how different the perception of private coaches of the USTA and player development. The outreach that we started culminating with the Team USA initiative that was brought forth by Patrick [McEnroe] and the USTA leadership is really bearing fruit. I really felt that. I felt like the coaches felt like they were being supported, respected and partnered with.

[Others say] you can relate to what junior development is all about and deal with coaches in the private sector. Could you elaborate a little more about that.
It’s not just feeding balls, not just doing private lessons, not just going to tournaments. There’s a huge emotional investment that the coach makes in the player and in the family. So knowing that, when a transition is happening, we in player development have to be very sensitive in respecting that relationship between the player and their primary coach and their parents.

How do you attract the top American athletes to tennis?
I think it’s an ongoing challenge. I mean, if we’re going to develop world-class players, we want to start with young people who are potentially world-class athletes. So I think it’s a collaboration really with community tennis. I know it’s something that Katrina is very serious about doing, opening the doors and changing some of the perception, creating more outreach opportunities. I know Gordon [Smith, USTA CEO] feels that way, as well. But it’s going to be a joint effort to broaden the base and reach out to communities that maybe we haven’t as much or that maybe perceived a lot of barriers when it comes to playing tennis.

I know you have four kids. I’m assuming some of them, if not all of them, have played some youth sports. As a parent going through some experiences with youth sports, how is that affected and how do you think you’ll bring that experience as a parent and relate it to this position?
Yes, I have four kids. They all play tennis. Two play because they really love it. Two play because it’s a free sport from daddy. But what I’ve learned in going to tournaments and watching them, watching a lot of my players, is that there’s a tremendous amount of pressure to skip levels, to be the eight-year-old that plays the 12-and-unders, to be the player that should be playing 60 orange that plays regular yellow. That would probably be the first thing that I would try to address or continue to address with education and incentives because when you skip levels, you at some point are really retarding the developmental process.

A great example to me of someone I admire with decision-making is CiCi Bellis. After CiCi got to the second round of the US Open, beat Cibulkova, tremendous win, she played the Youth World Fed Cup, 16-and-under event. She led her team to that title. Then she played the Eddie Herr and the Orange Bowl. The way she played 10Ks and 25Ks, that to me is an example of somebody who understands levels.

The second part of the experience with my kids is I love the concept of half-day tournaments and one-day tournaments for 10-and-under and 12-and-under tournaments. There are not that many parents who can afford to take full days, Saturday and Sunday, away from their family and jobs to be in that situation. Those are the two biggest things, the process of not skipping levels, and making competitive experiences more acceptable for average families.

What are your thoughts on how player development will work with those kids who are focused on the collegiate development pathway?
I think that with the changing demographics of the age of your Top 100 players, that college is going to become a very important part of the pro tennis pathway. If we’ve got Top 100 men who are 27 years old on average, on the women’s side 24, you’re talking about a significant window of time after a player graduates from high school. Again, Patrick [McEnroe} showed great leadership in setting up a collegiate function within player development. That’s something that I think we need to invest even more in to support our best college players, our best American college players, and our best American college coaches.

Why do you think it’s been so long since the American men have lifted the trophy at a Grand Slam?
Well, I think there are a lot of factors that have contributed to the globalization of the game and just make it such a difficult sport. I think one of the things that hurt us is that college was the most viable pathway in the ’70s and the ’80s. I think that changed a lot in the ’90s where you had a lot of international players that used that time and really broke into the Top 100 at a young age. I think it’s a question of windows. So we were blessed with Sampras, Courier, Agassi, Wheaton, Chang, and then with Roddick, Fish and Blake. We’ve been blessed with Serena and Venus. But now the role of the Federation in facilitating the development of a world-class player is much greater…We’re looking at a pool of about 16 boys who are coming up the pipeline right now, and then 14 women who are already in the Top 100. So the window’s open again. We just have to make sure that we get those players exactly what they need to get to the next level.

Do you think there’s a way of promoting kids into tennis, in the early years, making it more of a team sport than an individual sport to attract kids, that they feel part of a whole as opposed to on their own?
Yes, I think that’s already being done very effectively with some of the eight-and-under, 10-and-under events. Even at the national level, the competitive structure, we’ve added a lot of national team competitions in addition to zonals and intersectionals. I think that makes a huge difference in the way the game is perceived and the way a kid is introduced to tennis. 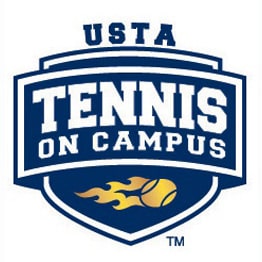 Last year the UF squad lost in the final to University of California-Berkeley, the fourth year out of the last five that the Gators have finished as the national runner-up. In 2013 UF lost to the University of Georgia in the championship match.

“Our team has improved in its depth [from last year],” said UF team captain Adam Decker. “We have multiple players outside our starting six, willing and able to play effectively in the lineup. This year we are trying to incorporate everyone into our national’s campaign, which keeps everyone on their game and working for our positions.”

The tournament includes the top 64 club tennis teams in the U.S., utilizing the World TeamTennis point system and including singles, doubles and mixed doubles. Teams are broken up into 16 pools of four teams, and the pool winners advance to the Gold Bracket which will decide a national champion, while pool losers advance into the Silver or Bronze brackets. 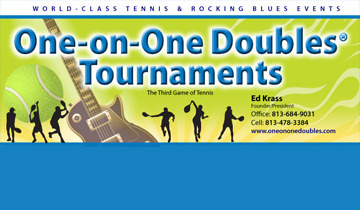 A One-on-One Doubles Tournament will be held on Friday, May 15 at 6 p.m. at the Florida Tennis Center in Daytona Beach, featuring the fast-paced cross-court singles format.

One-on-One Doubles is quickly becoming know as “the third game of tennis.” In addition to singles and doubles, now players can hone their doubles skills with the game that pits two singles players against each other, but playing cross-court tennis only where the doubles alleys are good.

“Divisions will be men’s and women’s 3.0-4.5, with a round robin format for each NTRP division,” says organizer Ed Krass. “We have introduced two-point plays for winning volleys and overheads during games also.”

The event will be held in conjunction with the USTA Florida Mixed 40 & Over Sectional Championships.

For more information or to enter go to http://tennislink.usta.com/Tournaments/TournamentHome/Tournament.aspx?T=170229#&&s=0.

“Jimmy, Dennis and John have been synonymous with coaching excellence for decades, and we’re honored to be able to recognize them as Team USA Coaching Legends,” said outgoing USTA Player Development General Manager Patrick McEnroe. “On top of that, Lynn and the team at the Tucker Tennis Academy have done outstanding work this past year and deserve to be acknowledged for setting such a high standard for coaching success.”

Evert is most famously known as the father of 18-time Grand Slam champion Chris Evert, but is equally regarded for his humility and lifelong devotion to the game. A Chicago native who played at Notre Dame, Evert made his permanent home in Fort Lauderdale, Fla., where he was the city’s tennis director for 49 years, coaching out of the renowned Holiday Park tennis center that now bears his name.

In addition to his five children, Evert coached world-class players such as Jennifer Capriati, Harold Solomon and Brian Gottfried.