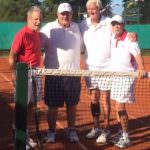 Palm Beach County’s Bill Poist climbed to the No. 1 ITF World Ranking in the Men’s 75-Over Doubles division after in late November claiming the Alfredo Trullenque ITF Seniors title in Santiago, Chile, with partner Don Mathais of St. Petersburg, Fla.

The Ocean Ridge resident was also a silver medal winner in doubles in October at the ITF World Championships in Antalya, Turkey.

Poist and Mathias, who is ranked No. 7 in the world in doubles, as a pair are the No. 2-ranked U.S. team in the 75-over division, winning three Category II events in Florida, the Atlanta Invitational, and a silver ball in the Clay Court Nationals in Virginia Beach.

“He credits top local professionals Dennis Granger at Seagate at the Hamlet, and Paul Cranis, a former Top 25 circuit player, and local players Howard Klinnert and Garrett Bornstein, as well as the members of the 10 o’clock club at the Delray Beach Tennis Center for his success this year,” says his wife, Ann Alexander.

A member of the Ohio Wesleyan University Athletic Hall of Fame, Poist led the team to successive conference and regional NCAA regional college titles in 1960-1962, compiling a career 91-8 record in singles and doubles.

Poist and Mathias are the lone Top 10-ranked Americans in the ITF 75-over doubles, with Poist holding a mere 10 ranking point lead over No. 2 Ilio Linhares Dos Santos of Brazil.

The ITA Coaches Convention is a professional development opportunity for collegiate tennis coaches, providing the opportunity to receive continuing education, participate in association business meetings and serve as leaders in promoting the growth of varsity college tennis.

The Convention kicks off on Friday with the USTA Junior Showcase, a tennis tournament held on the clay courts of the Naples Grande Beach Resort.

Throughout the weekend, coaches will be treated to workshops led by some of the biggest names in the sport. Among the featured clinicians are former NCAA Division III singles and doubles champion, 2014 Australian Open doubles finalist and current ATP Player Council President Eric Butorac along with Dick Gould, head coach of the Stanford Cardinal men’s varsity tennis team from 1966-2004 and two-time ITA Coach of the Decade.

A highlight each year at the ITA Coaches Convention is the ITA Membership and Awards Banquet. On Sunday evening, John Roddick (Oklahoma), Jamie Ashworth (Duke) and their fellow Wilson/ITA Coach of the Year winners from NCAA Division II, NCAA Division III, NAIA and Junior/Community Colleges will be honored for their achievements during the 2013-2014 season.

For more information about the 2014 ITA Coaches Convention go to www.itatennis.com/AboutITA/Convention.htm.

Vote for YellowTennisBall.com Florida Tennis Org., Individual of the Year

The 2015 YellowTennisBall.com Tribute Award nominees consist of individuals and organizations who have shown a passion and dedication for supporting the growth of tennis and community outreach in South Florida, and have gone above and beyond in dedicating their time to the sport.

The Delray Beach Open by The Venetian and YellowTennisBall.com congratulate all of this year’s nominees, and are proud to associate ourselves with each of them.

The organization and individual that receives the most votes will be interviewed on national television in over 32 million homes via Tennis Channel.

You may vote as many times as you wish (once per hour), voting ends January 9, 2015. All finalists will be presented an award on Stadium Court during the 2015 Delray Beach Open by The Venetian.

To see bios of the individuals and organizations or to vote, go to www.yellowtennisball.com/tributeaward.

“Click it for a tennis ticket” and make a tennis fan happy with a ticket to the most intimate ATP Tour tennis event in the United States — one where Grand Slam champions and Top 20 players can be seen up close. It’s also “the most wonderful time of the year” to purchase tickets — all individual tickets to the Feb. 13-22, 2015 Delray Beach Open by The Venetian Las Vegas are 20 percent off during the month of December.

The discount includes on-court “Best Seats In The House” and Veranda Seats (comes with food and beverage service), courtside box seats and reserved seats. And tickets can be printed at home for quick and easy wrapping or stocking-stuffing.

Headlining the best ATP World Tour draw in the event’s history are 2014 Delray Beach and US Open champions Marin Cilic and the world No. 1 Bryan Brothers. Two other former Delray Beach champions are also in the fold: Juan Martin del Potro (2011) and Kevin Anderson (2012). Top American John Isner, who has reached three straight semifinals in Delray Beach, is also returning.

The Delray Beach Open is also introducing its new Sky Suites and Sky Boxes for groups and companies who want to entertain during the 23rd annual event.

Sky Suite and Sky Box packages include all 17 sessions of the 10-day event and start at $6,250 for eight seats.

For discount tickets for the holidays go to www.YellowTennisBall.com.