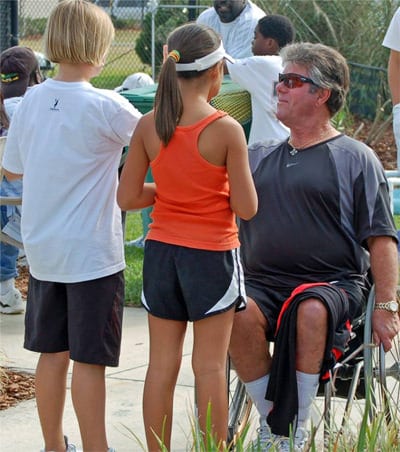 “Johnny truly was one of tennis’ most dynamic, passionate and courageous ambassadors, a true bright light in our sport and an example of the power of fortitude and commitment,” said Katrina Adams, national USTA chairman, CEO and president Katrina Adams. “Johnny, a Vietnam veteran who lost the use of his legs after being wounded in combat, used tennis as a vehicle to recovery and became an accomplished wheelchair player, traveling the world and competing in international events, achieving a career-high ranking of No. 24 in the world. That, in itself, would be a great story, but Johnny wrote an even more fascinating chapter to his biography when, in 2004, he became the first wheelchair player to compete against able-bodied players at a USTA League National Championship.”

Johnston was 19 in 1967 when he was shot twice in the side and once in the arm in Vietnam, leaving him paralyzed from the waist down. He took up wheelchair tennis and was inspired to try and keep up with his younger brother Joe, one of his six siblings, who was an accomplished player.

He also played wheelchair basketball, and moved to Gainesville in 1979 to play with the Renegades, a renowned wheelchair basketball club. In 1983 he rededicated himself to tennis, playing tournaments and becoming a certified teaching pro in 1989, teaching tennis at Santa Fe Community College and Westside Park in Gainesville, and coaching girls’ tennis at Buchholtz High School.

“He’s one of the most amazing people I’ve ever met,” Buchholz Athletic Director Steve Ellard told the Gainesville Sun in 2004. “He’s so positive. He has made such an impression on our kids, not just the tennis team. If you feel sorry for yourself, spend a day with Johnny. It’ll all go away.

He was known for some years donating his salary back to school programs for much-needed equipment. He also coached nationally-ranked wheelchair tennis players such as Beth Arnoult and Julia Dorsett.

In 2004 when his Gainesville team advanced to USTA League Nationals, he and doubles partner Rich Romano won their match for their 3.0-level senior team over two non-disabled players. In 2009 he was named the USTA Florida Wheelchair Player of the Year. He was ranked the No. 1 wheelchair player in Florida, and was a seven-time winner of the US Open Wheelchair Championships.

Johnston traveled all around North Florida, in addition to Orlando, Tampa, nationally and internationally, helping launch wheelchair tennis programs and promoting the sport.

Of wheelchair players participating in USTA League, Johnston said: “You’ve got to get out there and play. It’s a game of a lifetime. You can play with your friends and family. I want them to take advantage of it because it’s going to help their game all over. I would hope that a lot more would do it.”

Fourteen-year-old Amanda Anisimova of Aventura, Fla., who is coached by Nick Saviano and her father Kostya, has qualified along with seven other players for the 2016 Team USA National Junior Team, a training program designed to give a collection of America’s best young players, born in either 2000 or 2001, opportunities to train together during the summer and travel to play against top junior competition from around the world.

Anisimova qualified for the team directly, without having to play the qualifying tournament, as the top-ranked American in her age division and the No. 5-ranked in the world.

She has won two prestigious ITF junior tournaments in the last six months, the Grade A Abierto Juvenil Mexicano in November and the Grade 1 Coffee Bowl in Costa Rica in January.

USTA Player Development will provide the National Junior Team with training opportunities and coaching and travel assistance to select ITF junior tournaments throughout the summer, beginning with the French Open Junior Championships or the USTA Pro Circuit $25,000 tournament in Sumter, S.C., in June.