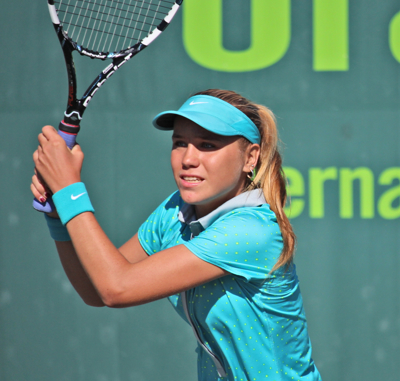 Sixteen-year-old Sofia Kenin, known to everyone in the junior tennis world as Sonya, ended 2014 with the best win and biggest trophy of her career, capturing the ITF Grade A Metropolia Orange Bowl last month at the Frank Veltri Tennis Center in Plantation, Fla.

A resident of nearby Pembroke Pines, Kenin came into the tournament with confidence, having reached the semifinals in 2013 as an unseeded 15-year-old. Kenin had claimed the Eddie Herr Grade 1 doubles title the week before, but it was only after her second round victory over a Japanese qualifier that she found her form and the key to staying focused throughout a match.

“I started eating finally, listening to the trainer,” said Kenin, who cramped in the second set of her 6-4, 6-7(3), 6-0 second round win over Mayuka Aikawa. “So now I’m always eating a peanut butter sandwich.”

Properly fueled, the 13th-seeded Kenin went on to defeat Eddie Herr finalist and No. 5 seed Gabby Ruse of Romania in the quarterfinals, then recorded what she called her “biggest win,” beating compatriot and friend CiCi Bellis, who had clinched the 2014 ITF World Junior Champion world No. 1 ranking the round before, 6-3, 6-2.

“I had a game plan,” said Kenin, who had lost to Bellis in their previous two meetings. “I was moving her, I served really good and I’ve definitely improved my forehand. When I played her before, my forehand would always break down. We’ve always played each other in the semis, always, and she ended up winning the tournaments. So I want to win this tournament.”

Kenin, who is coached by her father Alex and also works with the USTA in Boca Raton, made good on that goal, defeating qualifier Ingrid Neel, also of the United States, 6-3, 6-3 in the final.

“I saw she was nervous, so I just kept putting the ball deep,” said Kenin, who ended the year a career-high 17 in the ITF world junior rankings. “I wasn’t playing my best game at the beginning especially, but somehow I got in a groove and played good. I never expected this to happen.” 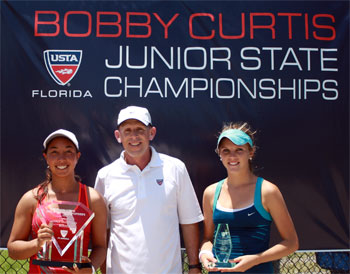 Boca Raton’s Jameson Corsillo was another player logging upsets during the week, with the No. 15 seed finally stopped in the Boys’ 12s final 6-1, 6-4 by No. 4 seed Niroop Vallabhaneni of Arizona. Corsillo en route to the final upset No. 7 seed Gavin Young and No. 12 Hunter Heck, both from Minnesota.

In doubles, Naples’ Victoria Emma and partner Anna Brylin of New Jersey ran to the Girls’ 16s final as an unseeded team, finally stopped 6-3, 6-3 by the No. 2 team of Elysia Bolton of Illinois and Grace Joyce of Massachusetts.

Boca Raton’s Charlotte Owensby was the No. 2 seed with partner Gianna Pielet of Texas in the Girls’ 12s doubles, losing in the final to the top-seeded squad of New Yorkers Gabriella Price and Yashna Yellayi 5-7, 6-3, 6-4.

The tournament has been hosted at the Veltri Tennis Center for the past seven years, and this event is the first USTA Pro Circuit tournament of 2015.

Hiltzik’s brother Jared fell in the last round of the qualifying tournament, as did fellow Americans Luca Corinteli, Cameron Silverman and Nick Chappell.

The tournament is the first of four consecutive Florida clay court events that kick off the 2015 USTA Pro Circuit season, and it is one of seven USTA Pro Circuit Futures events hosted by the Sunshine State during the first half of this year — the most of any state.