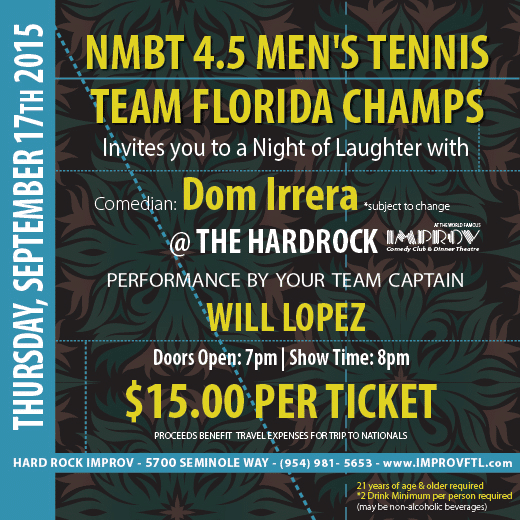 A Miami Men’s 4.5 USTA League tennis team is preparing to laugh all the way to USTA League Nationals.

Earlier this month the team, captained by Will Lopez and playing out of the North Miami Beach Tennis Center, defeated fellow Miami natives out of the Salvadore Park Tennis Center of Coral Gables 3-2 in the final of the 2015 USTA Florida Adult 18 & Over 4.5 League Sectional Championships at the Florida Tennis Center in Daytona Beach.

Now captain Lopez will take the comedy stage to raise money for the team’s trip to Rancho Mirage, Calif., in October for the national championships.

“Since it’s a costly trip they’re having a fundraiser next month at the Hard Rock Improve comedy club,” says local league coordinator Cory Browarnik. “Their captain is a part-time stand up comedian. All proceeds from the $15 admission ticket will go to the guys.”

The comedy set on Sept. 17, 2015 at 7 p.m. will also include a performance by Dom Irrera, who has appeared on Seinfeld and the Late Show with David Letterman.

The Hard Rock Improv is located at 5700 Seminole Way in Fort Lauderdale.

For more info go to http://centraldentalsupply.com/niofcowidomi.html. 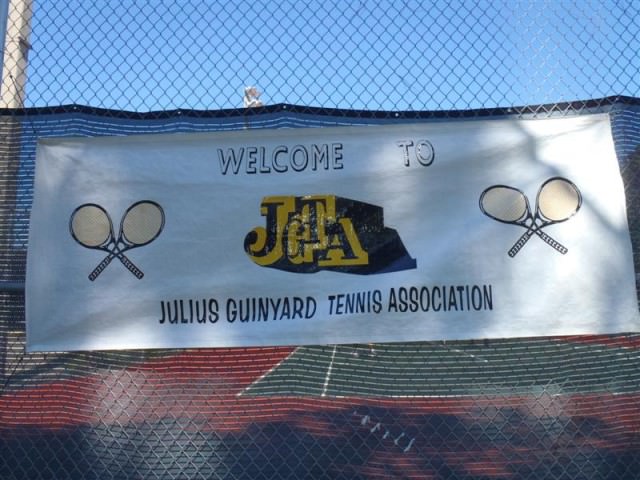 The Clanzel T. Brown Park in Jacksonville was the beneficiary of $20,000 in USTA funding in 2013 as part of its Davis Cup Legacy Program when Jacksonville hosted a U.S. Davis Cup match against Brazil. The City of Jacksonville also contributed funding for the project which included the resurfacing of seven standard courts and the creation of stand-alone 10 and Under Tennis courts.

The Julius Guinyard Tennis Association is a nonprofit organization that introduces tennis to youth and adults. The target audience is inner-city and low-income individuals, but free clinics are open to anyone who would otherwise not have an opportunity to learn the game. A secondary goal is to encourage and enable volunteerism, using tennis as a vehicle. The association is named after Julius Guinyard who introduced tennis, among other sports, to youth and adults in the black community in Jacksonville prior to desegregation.

Online registration for the event closes on Sept. 30.

For more tournament information or to enter go to www.r2sports.com/tourney/home.asp?TID=14357. 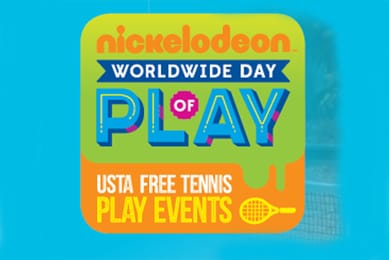 The event is open to youth and adults, and will feature tennis games and activities, prizes, music and more.

The USTA is leveraging its partnership with Nickelodeon, one of the largest cable TV networks capable of reaching children and their families, to promote and bring USTA Free Tennis Play Days to tennis sites across the country. The event is hosted by the East Coast Tennis Foundation, an official USTA Community Tennis Association and a member of the USTA National Junior Tennis & Learning network.