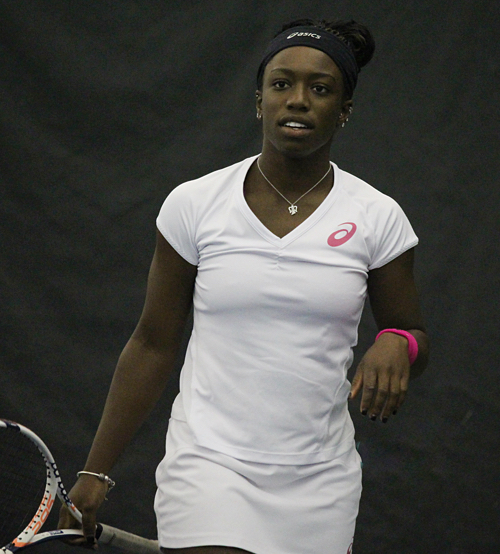 Nineteen-year-old Sachia Vickery has had her share of memorable tennis moments, including her 2013 USTA National 18s championship, which led to a main draw appearance at the US Open, where she won her first round match.

Yet until last month, the Miramar resident hadn’t won a professional singles title, a void she filled in the first USTA Pro Circuit $25,000 women’s tournament of the year in Plantation.

Vickery defeated her friend and doubles partner Samantha Crawford 6-3, 6-1 in that final, then two weeks later captured the singles championship in the $25,000 tournament in Sunrise, beating Sara Sorribes Tormo of Spain 6-2, 2-6, 6-3.

Vickery’s WTA ranking of No. 189 at the end of the year would have allowed her to compete in the Australian Open qualifying tournament, but she opted to stay home, training with Adrian Zeman at ZMG Tennis at Deer Creek Country Club in Deerfield Beach while preparing for 2015.

“I wanted to start out the year getting a lot of matches in,” Vickery explained. “Especially since the tournaments would be so close to home and it would be so much less expensive. My coach is right there, I would get to train with him; it just seemed it made more sense for me right now, just getting the matches in and starting off the year on a positive note.

“Australia’s a long way away,” Vickery continued, “and sometimes you don’t get as many matches there, you don’t get to practice as much. And it was really exciting, a lot of my family got to see me play, so it was a really good three weeks for me.”

Leaving the comfort and beautiful weather of home, last week Vickery played indoors at the $100,000 Pro Circuit tournament in Midland, Michigan, where the snow and cold are a challenge for her.

“It’s going to take a while to get adjusted to it,” admitted Vickery, who reached the quarterfinals in Midland. “But it’s a nice change every once in a while. It’s nice to see snow, I never get to see it.”

Vickery knows a good start to her year is important if she is to play in the main draw of this summer’s grand slams.

“I’m hoping to maybe make main draw of the French and Wimbledon,” Vickery said. “I think my ranking will move up to the 140s, so hopefully I can get some good results in the next two months or so and break Top 100 and see where it goes from there.”

As for what has led to her recent breakthrough, Vickery believes there are several factors.

“My serve has improved a lot since I’ve been training with Adrian, and my consistency. On the mental side, I’m staying in points better and not being as hard on myself as I used to before. I think I’m a smarter player and a better player than I was last year.”

Registration for the workshop is $150. Cardio Tennis trains in the three heart rate zones, burns calories and trains for tennis.

“Attendees of the Cardio Tennis training course will gain the proper experience for running an ideal Cardio Tennis class,” says instructor Michelle Krause. “Attendees will learn about working with players of different ability and fitness levels, the rhythmic feeding technique, and understanding what it’s like to wear a heart rate monitor.”

After participating in the course, attendees will also have a strong understanding of the six components of Cardio Tennis, creating a healthy curriculum, proper warm-up activities, Cardio games and drills, cool down activities and Cardio blasts, the proper music, and how to market and make money with Cardio Tennis.

To register or for more information go to www.CardioTennis.com.​