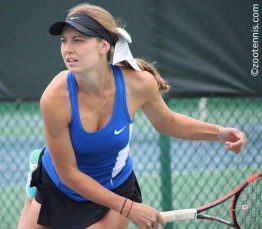 The rain was a constant companion at last week’s USTA National Spring Championships team event in Mobile, Ala., but all the waiting was worth it for Lakewood Ranch resident Maria Ross, who picked up her first USTA Gold Ball as a member of the Angels.

The competition included 16 teams of eight players — two from each USTA age division — in a four-day tournament modeled on a dual match in collegiate tennis. Teams were selected on the basis of rankings to ensure evenly balanced competition, and the Angels had their share of close calls in the abbreviated formats used due to the wet weather.

Out-of-Door Academy student Ross, the 2014 Florida State High School Class 1A overall singles champion, went 3-1 in singles and doubles competition. She clinched the Angels 6-2 quarterfinal win over the Dolphins at the 16s No. 2 position and contributed another point in the Angels 8-4 victory over the Devils in the semifinals.

Although her match in the final against the Firecrackers would be abandoned when steady rain prevented the remaining matches from being completed, the Angels had won more sets than the Firecrackers and were awarded the champions’ gold balls.

“It feels amazing,” said Ross, who turns 16 next month. “It was nice to have it with my team to share. I’ve never played in a tournament like this before, but we had an amazing team and we all bonded well and that was really important to the win. We made up for the rain; it was a great week.”

Ross, who has been training with Lance Luciani at Luciani Tennis Player Development in Bradenton for nearly two years, is only a sophomore, but she has begun to think about playing college tennis.
“Even though I’m a sophomore, I’m looking at colleges,” Ross said. “I’m excited about it. I’m definitely interested in a few.”

Registration for the workshop is $150. Cardio Tennis trains in the three heart rate zones, burns calories and trains for tennis.

“Attendees of the Cardio Tennis training course will gain the proper experience for running an ideal Cardio Tennis class,” says instructor Michelle Krause. “Attendees will learn about working with players of different ability and fitness levels, the rhythmic feeding technique, and understanding what it’s like to wear a heart rate monitor.”

After participating in the course, attendees will also have a strong understanding of the six components of Cardio Tennis, creating a healthy curriculum, proper warm-up activities, Cardio games and drills, cool down activities and Cardio blasts, the proper music, and how to market and make money with Cardio Tennis.

To register or for more information go to www.CardioTennis.com.