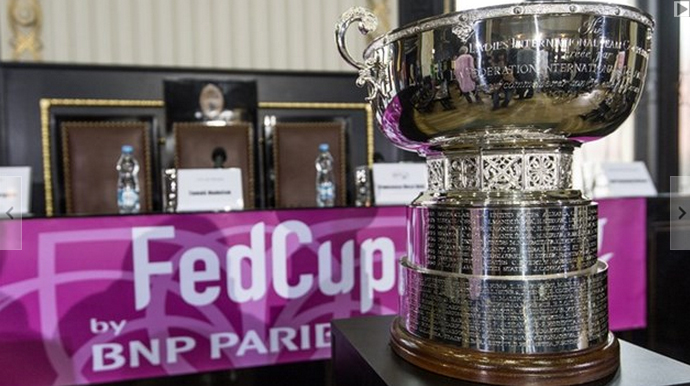 With a new qualification rule in place for the 2016 Olympics, the WTA stars are coming out this weekend for a blockbuster Fed Cup first round opening weekend, featuring Top 10 players No. 1 Serena Williams, No. 2 Maria Sharapova, No. 3 Simona Halep, No. 4 Petra Kvitova, No. 8 Aggie Radwanska, and No. 10 Angie Kerber among other stars on Feb. 7-8, 2015.

The U.S. squad, led by Serena and including sister Venus, CoCo Vandeweghe and former world No. 1 junior Taylor Townsend, will face Argentina in World Group II play in Buenos Aires. The winner will advance to the World Group Playoffs on April 18-19 and a chance to regain a place in the top World Group I for 2016.

Vandeweghe replaced Madison Keys (leg injury sustained at the Australian Open) on the team, while Townsend replaced Varvara Lepchenko (recovering from illness). The U.S. will compete in World Group II in 2015 for just the second time since the World Group format was instituted in 1995.

“We have an incredible amount of talent on this Fed Cup team,” said U.S. Captain Mary Joe Fernandez. “I have full confidence in this team to play some great tennis in Argentina and help us get one step closer to earning our way back into the World Group next year.”

Other nations in World Group II play attempting to reach the World Group in 2016 will be Slovakia at The Netherlands, Spain at Romania, and Switzerland at Sweden.

Nations in first-round play competing for the 2015 Fed Cup title in World Group I play will be:

For more info go to www.fedcup.com.

Dartmouth Upends U. of Miami for Ibis Open USTA ‘Tennis on Campus’ Title

The USTA Florida “Tennis on Campus” series event hosted by the University of Miami, the 2015 Ibis Open, attracted four out-of-state schools, which proved too much for Florida schools attempting to protect their home turf.

For the first time in Florida Tennis on Campus history, an out-of-state school won a Florida circuit event as visiting Dartmouth College from Hanover, N.H., defeated the University of Miami in the Gold Division final. The Jan. 24-25 event in Miami featured the World TeamTennis scoring format, with Dartmouth edging UM 24-20.

Absent was the University of Florida, which won the first three events of the Florida Tennis on Campus 2014-15 series.

“Seeing all those out-of-state schools at the event meshing with the Florida teams was awesome, and provided for some great tennis that we’ve never seen before,” said UM Club President Zach Kurfirst.

It was UM’s second consecutive appearance in a final after falling to UF at the UCF Knitro Cup in Orlando on Nov. 8-9, 2014.

The next event on the USTA Florida Tennis on Campus circuit will be the FGCU Dirty Bird Classic in Ft. Myers on Feb. 7-8, 2015.

For more information on the USTA Florida Tennis on Campus series visit www.USTAFlorida.com/TennisOnCampus, or contact Desirae McLaughlin at tennisoncampusflorida@gmail.com.