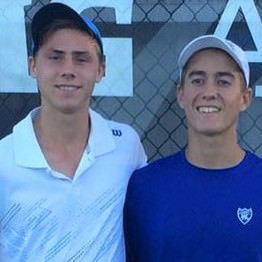 Christian Alshon (left) at the Eddie Herr in December

Alshon in doubles with Bradenton’s Russell Benkaim as the No. 4 seeds were upset in the first round 10-6 in a third-set super-tiebreaker.

The high school freshman is No. 1 in Florida and No. 3 nationally according to the Tennis Recruiting Network.

Last month Alshon was a doubles winner at the Eddie Herr tournament, pairing with Antoine Sanchez of Sarasota to win the Boys’ 18s title as the No. 8-seeded team, in the final coming from a set down to defeat No. 7 seeds Malik Bhatnagar (Canada) and Trey Hilderbrand (Texas) 3-6, 7-5, 10-8.

The National Winter Championships consisted of 128 singles players and 64 doubles teams in the 18s, 16s, 14s and 12s age divisions. They were played on outdoor hard courts at Scottsdale Ranch Park (18s and 16s) and the Reffkin Tennis Center in Tucson, Ariz. (14s and 12s).

Palm Beach Gardens, Fla., native and world No. 1 Serena Williams withdrew from her first match at the Hopman Cup exhibition in Perth, Australia, today due to inflammation in her knee suffered during practice.

“I’m disappointed to not take the court in Perth today,” the 34-year-old Williams said in a news release. “I had every intention to play this morning. Unfortunately, due to inflammation in my knee I need to rest and am confident to be out there against Aussie Gold tomorrow evening.”

Williams, who has not competed on the WTA tour since the US Open, is representing the U.S. in the team competition with fellow American Jack Sock. She was replaced in the opening match by another Floridian, Bradenton’s Vicky Duval who is making her return after a battle with cancer.

The 20-year-old Duval, ranked No. 656, lost 6-4, 6-1 loss to world No. 19 Elina Svitolina of the Ukraine, with Sock also losing his singles match to Alexandr Dolgopolov.

“It was amazing,” Duval, who has climbed as high as No. 87 on the WTA Rankings, said of filling in for Williams. “I was kind of nervous because I was filling in big shoes. But I had a really fun time today.”

She was diagnosed with Hodgkin’s lymphoma in 2014, and was cleared of the cancer in the latter half of 2015.

“This illness is behind me now,” Duval said. “I’m just grateful I went through it really well. I have a whole new outlook on life. I really appreciate the time I have out on the court. Every opportunity I have I embrace it on a whole new level. I’m just really grateful to be back and do what I love. And I’m going to keep pushing until I get the results I want.”

For updated results go to www.Hopmancup.com.