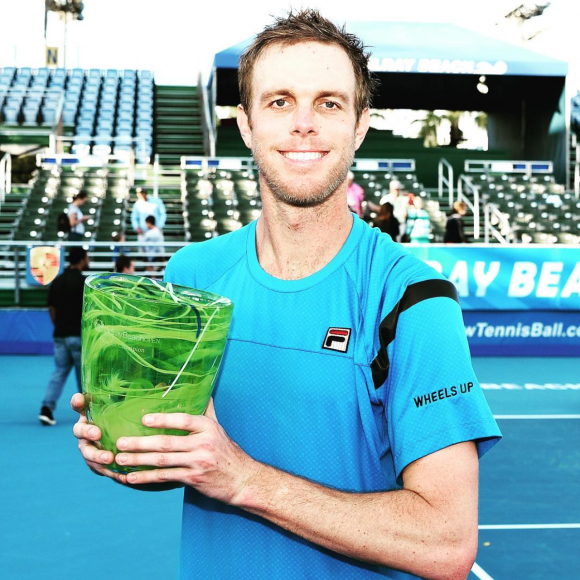 While both opponents were tournament underdogs as unseeded players, Rajeev Ram was the true Cinderella story when his run came to an end 6-4, 7-6(4) at the hands of fellow American Sam Querrey last weekend in the Delray Beach Open singles final.

The 31-year-old Ram in his 12-year career had only managed one appearance at Delray Beach, losing in the first round while three years losing in the qualifying rounds. But he put that all behind him last Sunday, upsetting No. 2 seed Bernard Tomic and No. 4 Grigor Dimitrov en route to the final.

“At the end of the day I’m one of the last two players left, so it was a good week, just definitely disappointing to not finishing the job,” said Ram, who led by a break over Querrey in both sets, but rose to a career-best No. 62 on the ATP Rankings. “I’m identifying what kind of player I am. Sometimes it takes people a little bit longer to figure it out. Hopefully, I’m going towards reaching my potential.”

For Querrey it a first ATP title since Los Angeles in 2012. The match ended in dramatic fashion with Querrey slapping a running forehand down the line past Ram at the net. When Ram challenged the call, the video replay showed the ball barely catching the outside of the line, and the match was over.

“It feels great, especially coming off last week,” said Querrey, who was a semifinalist at the Memphis Open. “To be in the winner’s circle, I’m really happy…I think in [six] of the 10 sets I was down a break, but I kind of willed my way. It was kind of ugly tennis the whole week.”

In the doubles final the Bryan brothers, Bob and Mike, led 9-5 in the third-set tiebreak before opponents Oliver Marach and Fabrice Martin fought off five match points, and six overall in the match, to capture the title 3-6, 7-6(7), 13-11.

“I’ll probably have a sleepless night on what we could’ve done differently,” Mike Bryan said.

The 37-year-old Bryans, who last year did not bring home a Grand Slam title for the first time in 11 years, currently sit at No. 20 on the ATP team rankings, still seeking their first title of 2016.

Similar to Pickleball, Masters Tennis is generally played on a shorter 60-foot court with the lower-bouncing “orange ball.” Players can use their own racquets, or for greater control use smaller, lighter racquets. Individuals that have stopped playing tennis due to injuries find the format more forgiving and accessible.

“We have more than 50 facilities playing Masters Tennis in and outside of Florida,” Murphy Folz says.

Masters Tennis will be part of a program for senior activities at Providence Park in Tampa in accord with the Department of Family and Aging Services, which oversees 18 local facilities. At the McMullen Tennis Complex in Clearwater, Masters Tennis is going to be part of Rally the Family festivities to get more families on the court.

For more info on Masters Tennis in these locations contact:

For more info on Masters Tennis in other areas of Florida go to www.ustaflorida.com/adulttennis/masters-tennis.