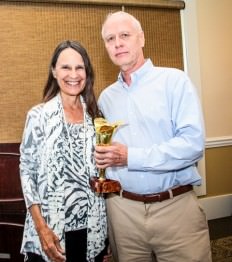 The annual Lily Award is based on dedication to Easter Seals’ mission of providing services to help children and adults with disabilities and/or special needs.

Booth has given more than a decade of service to Easter Seals, beginning with his sponsorship of the inaugural 2004 Walk With Me event, and commencing with six years of board service. When Easter Seals pursued a grant from the Mitsubishi Foundation to create an inclusive sports recreational program in 2006, Booth and USTA Florida responded promptly to help develop a program to utilize the funds.

“Under his leadership, the ‘Tennis Everyone’ program commenced quickly with the goal of introducing children with physical disabilities to tennis, and including them alongside their typically-developing peers,” said Easters Seals Volusia/Flagler Vice President of Gift Planning Susan B. Moor.

“Once Doug stepped up help make ‘Tennis Everyone’ a reality, necessary milestones were accomplished quickly to ensure its success. Local Port Orange resident and retired two-time Paralympic wheelchair tennis player Nancy Olson was recruited to lead Tennis Everyone’s team of mentors and coaches, and a private donor was engaged to assist Easter Seals’ current equipment loan closet to include sports equipment and gear.”

Since its inception, the Tennis Everyone program has been benefiting dozens of Easter Seals clients and other mobility-impaired adults, including nationally-ranked wheelchair tennis powerhouse Auburn Smith.

Booth has been the executive director of USTA Florida since 1991. During his tenure the organization’s membership has grown from 23,000 to more than 50,000, the budget has increased from under $1 million dollars to more than $4 million, and the professional staff has increased from 5 to 27. The Florida Section presented Booth with its Merit Award in 1988 for “outstanding contributions to amateur tennis in Florida.”

For more info go to www.esvf.org. 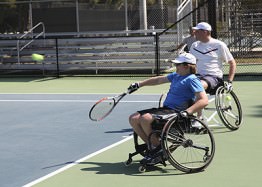 A Tampa-based film company is putting together funding and is in pre-production for “a true-life look at living with a physical disability,” a movie tentatively titled “Believe to Achieve,” based on Florida teenage wheelchair tennis player Chris Herman.

Herman at age of 10 was in a car accident that left him a paraplegic, and he quickly rose to become a top junior wheelchair player. The 17 year old from Gulfport, Fla., currently travels the world representing the U.S. at major wheelchair tennis competitions, and is a member of the USTA junior wheelchair tennis team. Herman won gold at the 2015 Paribas World Team Cup Wheelchair Tennis Tournament, and looks to contend for the U.S. at the 2016 Paralympics in Rio de Janeiro.

“My desire is for this video to focus on Chris’ life, dealing with his accident that lead to a spinal cord injury and what rehabilitation services Chris had used,” says Director Brian K. Dery. “The video will highlight all the other different services that are available that can help those in need. This video is an important project due to the fact that the medical education is limited to the newly injured.

“As Chris’s life has drastically changed, he travels the world with his family competing in wheelchair tennis, while being an inspiration to his family, friends and peers.”

Dery’s production company says that according to a study initiated by the Christopher & Dana Reeve Foundation, there are nearly 1 in 50 people living with paralysis — approximately 6 million people. That’s the same number of people as the combined populations of Los Angeles, Philadelphia, and Washington, D.C. And that number is nearly 33 percent higher than previous estimates showed.

It means that we all know someone — a brother, sister, friend, neighbor, or colleague — living with paralysis,” Dery says.

For more information on the film project go to www.tripleknotproductions.org.