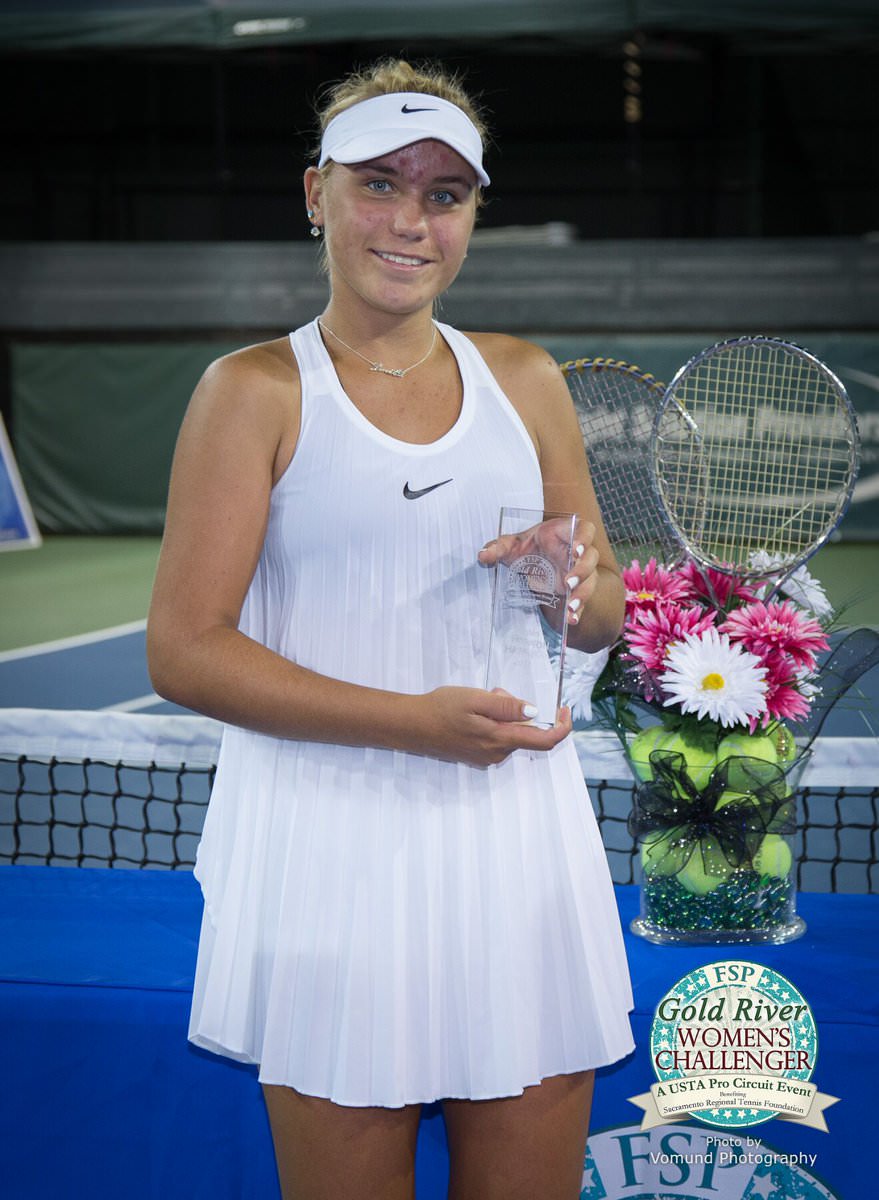 Sofia Kenin of Pembroke Pines, Fla., will compete in the US Open main draw for the second straight year after winning the USTA Pro Circuit’s US Open Wild Card Challenge over the weekend.

She finished the challenge with 81 total points, largely on the strength of winning the $50,000 FSP Gold River Women’s Challenger in Sacramento, Calif., two weeks ago.

The 17 year old made her first US Open main draw appearance last year, receiving a wild card after winning the 2015 USTA Girls’ 18s national title. She lost to Mariana Duque-Marino in the main draw, then reached the singles final of the US Open Junior Championships.

Kenin subsequently climbed to No. 2 in the ITF World Junior Rankings in November of last year and reached the quarterfinals at junior Wimbledon earlier this year. She represented the U.S. at the 2014 Youth Olympic Games and also competed at the 2016 ITF Junior Masters, both held in China. The amateur player also won her first USTA Pro Circuit singles title at the $25,000 event in Wesley Chapel, Fla., in January.

The 2016 US Open main draw will be held Monday, Aug. 29, to Sunday, Sept. 11, at the USTA Billie Jean King National Tennis Center in New York.

To see the US Open Wild Card Challenge standings or for more info go to www.usta.com/Pro-Tennis/Pro-Circuit/2016_us_open_wild_card_challenge_standings/.

In addition to presenting the latest news and research about the tennis industry, the forum will include a ceremony honoring the two 2016 inductees into the Tennis Industry Hall of Fame: Eve Kraft and Eugene Scott.

The Tennis Forum, which is presented by the Tennis Industry Association (TIA), is free to attend, but space is limited so attendees should register at www.TennisIndustry.org/forum.

The Forum will include the latest on tennis participation and new consumer research, equipment sales data, grow-the-game efforts, updates from the USTA, and more. Registered attendees will receive a copy of the 20-page 2016 TIA State of the Industry report, which will include a four-page Global Tennis Marketplace summary.

The Forum also will outline pathways to increasing the number of “core” tennis players, ways to better define and boost the economic growth and impact of the tennis industry, and effective ways to distribute clear, consistent messaging of health, fitness and the reasons to play tennis.

The Forum will conclude with a ceremony honoring the 11th and 12th inductees into the Tennis Industry Hall of Fame. Eve Kraft, who died in 1999, was a visionary when it came to bringing tennis into local communities. Eugene Scott, who passed away in 2006, was the incisive founder, publisher and editor of Tennis Week magazine.

To register for the Tennis Forum, visit www.TennisIndustry.org/forum.