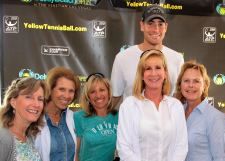 The annual USTA Member Appreciation Reception, featuring lunch, gifts and appearances by ATP pros, will be held on Monday, Feb. 16, 2015 from 1-2:30 p.m.

“Present your membership card to enjoy a complimentary lunch, drinks and gifts while hanging out alongside ATP pros,” say tournament

officials. “A valid ticket for that session is necessary to enter the tournament grounds.”

That Monday will also feature the kick-off of singles and doubles first-round play, along with USTA Kidz Day.

A USTA Member Discount will be in effect from Feb. 13-20, where USTA members receive specially-priced (20% off) discounted tickets for sessions 1-14 (day and evening). A limited number of discounted tickets are available and must be purchased by Jan. 31, 2015.

Among the players confirmed in the 2015 ATP World Tour field are John Isner, Juan Martin del Potro, 2014 US Open champ Marin Cilic, and the Bryan brothers. Among the ATP Champions field will be James Blake, Michael Chang and Goran Ivanisevic.

For more info go to www.yellowtennisball.com/usta. 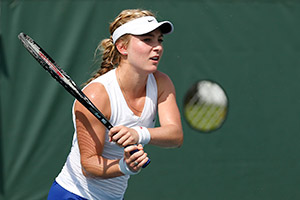 The University of Florida, the only Florida school and one of only 16 schools with both the men’s and women’s teamed ranked in the Top 25, will embark on the spring season with the women at the No. 3 spot and the men at No. 13 on the ITA Division I College Tennis Rankings.

Florida’s Brooke Austin is the highest-ranked freshman after semifinal finishes at both fall national tournaments, rising to the No. 6 overall ranking. Austin was the No. 1-ranked player in the 2014-15 Division I Preseason Women’s Newcomer/Freshman Rankings.

Austin’s UF teammate Josie Kuhlman of Ponte Vedra Beach, Fla., also cracked the Top 10 after posting an 18-4 fall record. Kuhlman is ranked No. 9. Junior Brianna Morgan opens the 2015 season ranked No. 11. Sophomore Kourtney Keegan joins her in the Top 30 at No. 26, while freshman Peggy Porter debuts at No. 40, and sophomore Belinda Woolcock rounds out the Gator rankings at No. 43.

On the men’s side, Sophomore Maxx Lipman, a captain of this year’s Gator squad, leads the Florida singles rankings at No. 34. Junior Diego Hidalgo earned the No. 60 ranking, while sophomore Elliott Orkin is at No. 81.

The SEC Conference has the most teams in the Top 25 in both the men’s and women’s rankings.

The next ITA Team Rankings will be published weekly beginning Jan. 20 through the end of the season, excluding the weeks during the ITA Division I National Team Indoor Championships in February. Individual singles and doubles rankings are published every other week beginning on Feb. 10.