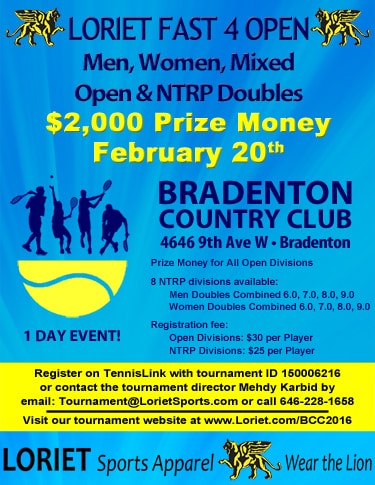 The one-day Loriet Fast4 Open prize money and NTRP doubles tournament utilizing the Fast4 format will be held on Feb. 20, 2016 at the Bradenton Country Club in Bradenton, Fla.

FAST4 has a number of variations but is typically abbreviated scoring with shorter, faster matches. Matches typically play lets, feature no-ad scoring, and sets of first to four games with a tiebreaker at three games all.

“All players are guaranteed at least two matches, win or lose,” says organizer Jack Steyn. “All seven courts have lights, so we expect all divisions to complete on Feb. 20. We are using the Fast4 format, which allows most matches to last 45-60 minutes. Trophies for all winners, and prize money for all Open divisions.”

To register visit the Tennislink page at Tennislink.usta.com/Tournaments/TournamentHome/Tournament.aspx?T=184512.

For more info and prize money breakdowns visit the tournament website at http://Loriet.com/BCC2016. The PowerShares Series, the tennis circuit for champion players over the age of 30, will visit Orlando on Dec. 1, 2016 with Andre Agassi, Andy Roddick, Jim Courier and James Blake competing for the title.

Each PowerShares Series event features two one-set semifinal matches and a one-set championship match. For the second straight year, players will make their own line calls, with assistance of electronic line-calling.

Blake is the odd man out among three players that reached the world No. 1 ranking during their careers, but he is the most recent player to come off the ATP tour. Blake beat Agassi at 2002 Washington, had three wins over Roddick during his career (two on grass), and never faced Courier, turning pro 11 years after the four-time Slam winner.

For more info go to www.powersharesseries.com.