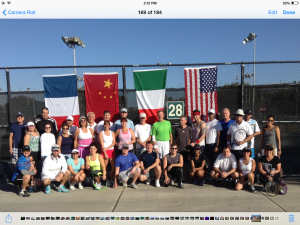 More than 30 players were divided among four teams for doubles competition. This month, teams represented China, USA, France and Italy. Team match-ups and partners were rotated for mixed, men’s and women’s doubles.

“We hold the Davis Cup event quarterly and have been sold out each time,” said Brundle. “It’s social but competitive with a very fun, laid-back atmosphere. Players bring appetizers related to their country, play lots of tennis, win prizes in raffles, meet new people and have lots of fun.”

The next Davis Cup competition is Fri., Aug. 1. Visit www.tampatennis.net to learn more. 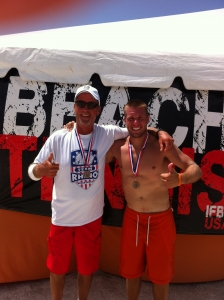 Thirty years ago, Beach Tennis originated on the beaches of Italy. Later this month, the Sheraton Sand Key Resort on Clearwater Beach will host the 2014 Beach Tennis Tampa Bay Open.

Beach Tennis combines skills of tennis with beach volleyball and includes rules such as no-ad scoring, pro-set matches, one serve to start the point, lets are in play and serves may be directed anywhere on the court.

Steve Culver, known as Coach Rhino in Beach Tennis circles, brought the sport to the Clearwater area about 10 years ago. Also a USPTA-certified teaching professional, Culver is focused on promoting the sport as well as raising his own professional ranking (currently No. 44 in singles and No. 116 in doubles).

“After more than 20 years working at Countryside Country Club, I recently decided to chase my dream and passion of building Beach Tennis to its fullest in the Tampa Bay area,” said Culver. “I plan to compete on the professional Beach Tennis tour in hopes of improving my rankings and will organize tournaments here in the area.”

The Tampa Bay Beach Open is May 30 to June 1. For more info, visit www.beachtennistampabay.net.