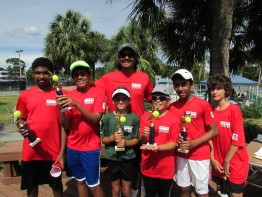 Playoffs were held for divisions that included at least four teams; otherwise, total team points earned during the season determined the division winners.

“I took on this position because I remembered how much fun my daughter had growing up playing tennis,” said Schroeder. “The friendships, the camaraderie and the love of a lifetime sport have given the whole family an excellent experience.”

Six teams competed in the 12/14A Intermediate division, four in the 12/14AA Advanced and three in both the 10-and-under Orange and the 12-and-under Green Dot. 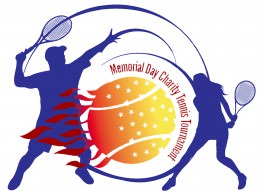 This month’s 25th Memorial Day Charity Tennis Tournament at East Lake Woodlands Country Club in Oldsmar promises to better than all the others!

Since the first tournament was held in 1990, the men’s, women’s and mixed doubles contest has grown in popularity to now include over 200 players competing among NTRP divisions for the coveted “gold” medals. Over the last 24 years, more than $300,000 has been raised to benefit various causes.

“It’s like throwing a four-day party,” said Ruby Johnson, who has volunteered for the tournament and served as its coordinator for 20-plus years. “We’ve had good feedback – 100 percent positive – and that’s been very rewarding.”

This month’s tournament benefits FARA, Friedreich’s Ataxia Research Alliance. FARA is a national non-profit organization dedicated to curing Freidreich’s ataxia, a debilitating, degenerative neuro-muscular disorder that affects about one in 50,000 people in the U.S.

The May 22-25 event kicks off with a draw party and the unveiling of the draw on Friday, followed by matches Saturday and Sunday leading up to Monday’s main draw finals. All players will receive a commemorative T-shirt, goodie bag, live auction and silent auction opportunities and raffle prizes.

Visit www.TennisCharity.org to register before the May 20 deadline.