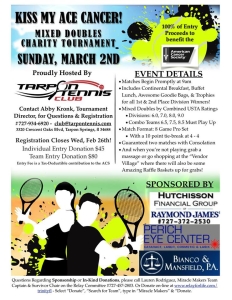 Kiss My Ace for Cancer in Tarpon Springs

This year’s event begins at 9 a.m. Sunday, March 1, with 100 percent of the entry proceeds directed to the American Cancer Society. Cost is $45 per person or $80 for a 2-person team. Registration includes a continental breakfast, buffet lunch, goodie bags and awards for first- and-second-place finishers in all divisions. 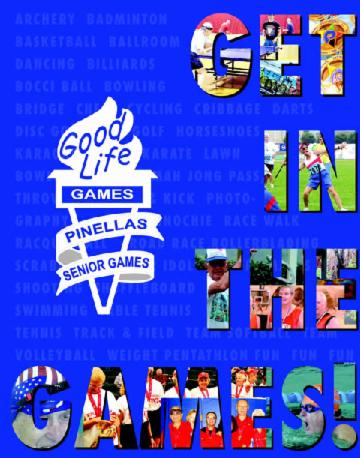 After several years’ absence, tennis returns to the list of 20-plus events for this year’s 36th Annual Pinellas County Senior Games.

A partnership was formed at last year’s Tennis Play Day, held at the Henry L. McMullen Tennis Complex, when representatives from the Suncoast Tennis Foundation and the Florida Sports Foundation met and agreed to re-introduce tennis in to the Games.

“One of the volunteers at our Tennis Play Day last March was the event manager for the Florida Sports Foundation and when we talked, it seemed a good idea for our groups to form a partnership,” said Judy Foster, executive director of the STF. “She invited me to speak at a statewide meeting of all the organizers of the Florida Senior Games. I told them that I thought community tennis associations like the Suncoast Tennis Foundation could help them increase the participation numbers in tennis at their local games. STF offered to run this year’s Pinellas County Games, which are coming up next month.”

The McMullen Tennis Complex will host the tennis competition Mar. 7-8 in the 36th Annual Pinellas County Senior Games, and Foster with STF board member Wendall Walker will direct the competition.

Men’s and women’s singles and doubles and mixed doubles competition will be offered in five-year age increments beginning with the 50-54 age division. Match format will be best two of three sets played on soft courts.