Teresa Thompson, founder and publisher of Tennis View magazine, has taken on a new project to spread tennis news in the Tampa Bay area.

Come January, Tampa Bay Tennis Magazine will hit the shelves with the goal of connecting people to the game of tennis via great articles, photography and design. The magazine is to be a resource guide and annual yearbook for Tampa, St. Petersburg, Clearwater and Sarasota.

“Several reasons led me to the launch of Tampa Bay Tennis Magazine, but when you boil it down, the publication simply gives people one more reason to be excited about tennis,” said Thompson. “It doesn’t matter if the recreational player has been participating in the sport for decades, or is a newbie, or has never played but is interested in trying a new sport, the magazine will help connect people to the game.”

Thompson is an avid recreational tennis player and an ardent student of the game. Combining her passion for tennis with her extensive background in various facets of media led her first to the publishing of Tennis View in 2008 and the upcoming Tampa Bay Tennis Magazine.

The six-year old Tennis View was recognized as one of the top 15 magazines among 800 published in 2008 according to magazine expert Dr. Samir Husni. 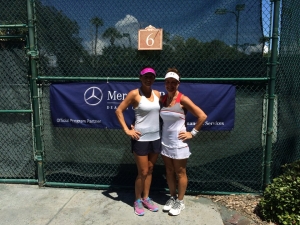 Nearly $6,000 was raised for the Pinellas Education Foundation at last month’s 2014 Mercedes-Benz Dealer Championships staged at the Renaissance Vinoy in St. Petersburg.

Women’s doubles teams competed in the 4.0 and 3.5 divisions under the directorship of Vinoy’s Tennis Director Hans Gallauer.

Top finishers were Sandra Lamas and Liz Theofilos in the 4.0 and Tara Eckhoff and Ann Dellegatto in the 3.5.

The Mercedes-Benz Dealer Championships is a nationwide amateur-only tennis contest for women 21 years-and-older.