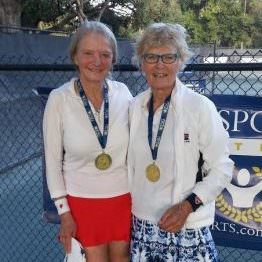 For the second consecutive year, Clearwater hosted the annual Florida Senior Games, a multi-sport competition for participants at least 50 years of age.

This year’s competition included 24 sports held at various sights around Clearwater. Tennis hosted nearly 240 players, the most since 2005.

Competition was held in men’s and women’s age-division singles, doubles and mixed doubles. About 80 competitors represented the Tampa Bay area.

Among the Tampa Bay winners was Ria Graham, who won the women’s 75-79 singles and the 75-79 doubles with Michaelin Watts from California.

“The quality of competition was pretty good, especially in the doubles,” said Graham of New Port Richey. “We won one match 7-5, 7-5 and then the final in a third-set tiebreak. Michaelin and I knew each other from Les Grandes Dames tournaments but had never played together. Even so, we played well enough together to win, and if our schedules workout, we’ll compete at nationals.”

Florida Senior Games medalists qualified for the 2017 National Senior Games to be held June 2-15 in Birmingham, Ala. For a listing of all medalists and qualifiers, visit www.flasports.com.

Wooden Racquets Only at Woodie Night 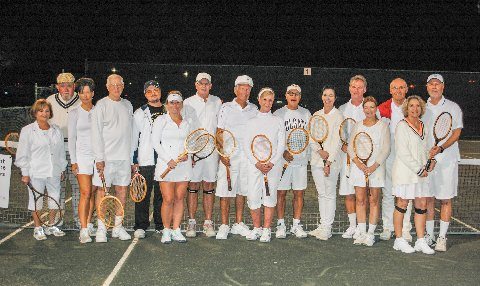 Todd Nelson’s hobby of collecting vintage wooden tennis racquets morphed into an annual tennis social beginning in 2005 at Countryside Country Club. This year’s 11th annual event included about 30 players who played, socialized and helped raise over $2,000 for the Florida Chapter of the Children’s Heart Foundation.

In addition to the on-court play that resulted in Adrienne Weiss being named the women’s winner and Steve Hitchcock the men’s, Debbie and Brad Golomb were named best theme-dressed.

“The workmanship in some of the racquets I found is just remarkable, especially the Wilson Jack Kramer Autograph, Davis Classic, Volkl and the Slazenger Black Demon,” said Nelson. “Thrift stores have been the best source for me to find racquets and occasionally a garage sale. I seldom pay over $5 and can’t recall ever paying over $10.”

Nelson is looking forward to finding more vintage wooden racquets for his next Woodie Night! 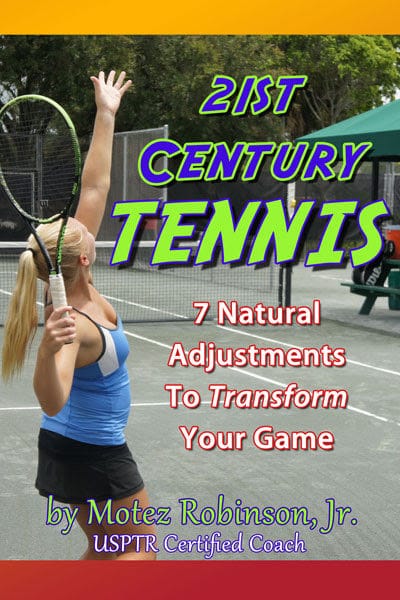 Inspired by former tour player Oscar Wegner, who created the Modern Tennis Methodology in the mid 1960s, Coach Mo developed his own instructional book that adds to Wegner’s belief that tennis can be an easy sport to learn and excel.

“I’m seeing such better results with my students using this concept of teaching, “ said Coach Mo, former college player and current USPTR teaching pro in St. Petersburg. “My motivation to write this book is to show that there’s a different — and better — way to learn to play than the conventional method.”

Coach Mo’s book was a three-year project and is currently available on Amazon Kindle. This month, hard copies will be available. Visit www.Amazon.com.