Tampa Blog: Tennis for the Dogs; Kissing for Cancer

Tennis for the Dogs 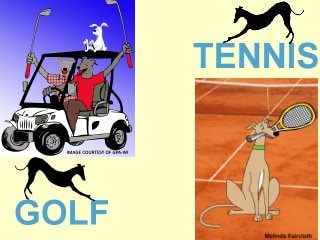 Bardmoor Golf and Tennis Club in Largo is hosting a one-day tennis and golf benefit for the Greyhounds Pets of America in Tampa Bay on April 17, 2015. The Scramble “Fore” The Greyhounds two-sport event came to fruition largely thanks to foster volunteer and tennis player Janet Stuart.

“Greyhounds are working dogs and are raised with discipline to fit the race track lifestyle,” said Stuart. “When their race days are over, in the old days, a lot of race tracks would just kill them because it cost too much to give them the needed medical attention and daily care.

“Greyhound Pets of America-Tampa Bay is one of the non-profit organizations working to help transition the retired greyhounds to find their forever home. Since there is no federal funding, donations and special fundraising events and dedicated care from volunteers are the only means for continuing this rescue mission.”

The tennis event includes a noon check-in with lunch, followed by action in women’s doubles in 6.5 – 7.0 and 8.0 – 8.5 NTRP divisions and in 8.0 mixed doubles. The format promises to be fast and furious with each match consisting of the best 2-of-3 10-point Coman tiebreakers with a minimum of three matches guaranteed. A dinner will follow.

To learn more, go to www.ScrambleForeTheGreyhounds.com. 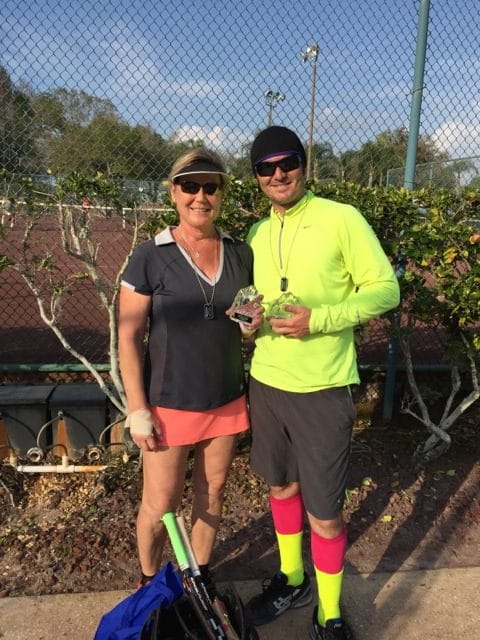 The third year of the one-day event included 60 players competing among its four NTRP playing divisions and raised nearly $4,000 for ACS.

In addition to the action on the red clay courts at the north Pinellas County club, players were treated to a Continental breakfast, buffet lunch, free massages, raffle baskets and Goodie bags. Trophies were awarded to first and second-place division winners. Winners and runners up qualify for the coveted end-of-the-charity-doubles 2015 season tournament, the Tournament of Champions, hosted by the Suncoast Tennis Foundation.

Joining 9.0 champions Patti Ryan and Ben Kronk in the winners’ circle were Julie Wakefield and Dave Biren in 8.0, Ramona Kirsch and David Gulaitis 7.0 and Shannon and Chris Azbill 6.0. Runners up were Lisa Oonk and Felix Herrera in 9.0, Michelle Buric and son Alex 8.0, Joanne Ryan and Phil Gerlach 7.0 and Denise Rodgers and Josh Comer 6.0.