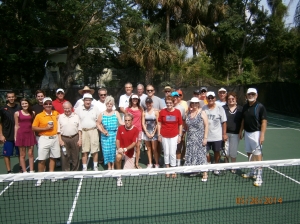 Les Mandelker is a passionate, dedicated tennis player who decided this past Memorial Day was the perfect time to celebrate the game he loved with the friends he had met through tennis over the years.

More than 30 players enjoyed an afternoon of World TeamTennis-style play on Mandelker’s backyard tennis court, reconnecting with players of the past and present and enjoying a bountiful, delicious cookout.

Mandelker, who is currently ranked No. 5 in the state in the men’s 65-and-over, started playing as a 12-year old, was unbeaten in his high school playing days and competed for Michigan State a couple of years while studying to be a veterinarian.

“I thought it was a good time to pay tribute to my weekend warrior friends,” said Mandelker. “It was Memorial Day, the French Open had begun and it was the 20th anniversary from when I built the tennis court in my backyard. It was a perfect day to celebrate.”

Players received no trophies for their play nor invitations to national competition, but what they earned was an afternoon of good ole fashion “play for fun” — priceless. 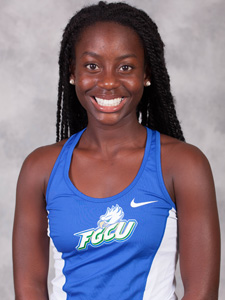 The Youth Tennis Foundation of Florida awarded its annual Van Ryn Scholarship to Sarah Means of Wesley Chapel. The Van Ryn award is named for John Van Ryn who was an established player in the 1920s and 1930s and was inducted into the International Tennis Hall of Fame in 1963.

The award was established in Van Ryn’s memory to recognize a college student who, like Van Ryn, was dedicated to helping others, either through tennis or other community efforts.

Means just completed her junior year at Florida Gulf Coast University while majoring in business management and competing on the FGCU tennis team.

“Sarah is certainly deserving of this recognition,” said FGCU’s first-year coach Courtney Vernon. “My first impression of her was that of professionalism — she respects authority, never has to be reminded of anything and does the right thing. Her leadership is evident on and off the court.”