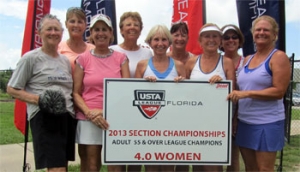 This month, two teams from Region 3 will represent Florida in USTA Adult 55 League National Championships for the 2013 season.

Last spring, the women’s 8.0 squad Safety Harbor Spa claimed the state title, as did the men’s 7.0 from Shipwatch Tennis Club in Largo.

“We have strong, competitive players and we pretty much used set teams,” said Emily Signoracci, captain of the women’s squad. “To do well at nationals, we need to stay in the moment and play the way we are capable of playing.”

Steve Mullis, first-year captain of the men’s team, believes confidence will help his team at nationals.

“We have good players who understand how to support their partners on the court,” said Mullis. “At nationals, we will need to each match one at a time and play with the same confidence that worked for us during league play.”

Last month, the Innisbrook Women’s Open, a $25,000 USTA Pro Circuit contest staged at the Innisbrook Resort in Palm Harbor, included an All-American final between Grace Min and Nicole Gibbs. Min won her second Innisbrook title with a 7-5, 6-0 score over the former NCAA champion.

In doubles, the non-seeded team of Gioia Barbieri of Italy and Julia Cohen from Miami upset the top seed and No. 3 seed to win their first title together.

Next month, Harbor Island Athletic Club will host Region 3’s first-and-only men’s Futures event of the year. The $10,000 USTA Pro Circuit tournament is slated for May 9-18 and will include a 32-player singles draw and a 16-team doubles.