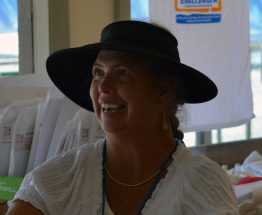 Mary Alice Linzy learned how to compete in tennis from her father, who had one arm but still played professionally on the Florida circuit in the 1940s.

The Tallahassee native, who is an active league player, has volunteered in the game for more than 23 years because, “I want children to enjoy tennis as I did as a child.”

Linzy volunteers as a USTA Junior Team Tennis coach for the team at Forestmeadows Athletic Center in Tallahassee. She says one of her strengths is keeping the kids motivated and keeping tennis fun.

“Kiley is a granddaughter of a friend, and I’ve known Kiley for a while,” she says of one of her players. “I was helping kids on the court with Junior Team Tennis. Kiley didn’t look to be having fun, moping around and not trying.

“I asked Kiley, jokingly if she wanted me to start singing and dancing on the court. She said with a look of embarrassment, ‘Oh no Miss Mary Alice.’ I saw a change in Kiley — she looked as though she wanted to be there. Afterwards, Kiley’s grandmother was pleasantly surprised how much she enjoyed playing.”

She still retains the memories of starting the game with her father and the love he instilled in her for tennis.

“He began teaching me how to play when I was 4 years old,” she says. “I still have my first racquet.”

“Mary Alice Linzy is a much-valued tennis volunteer in Tallahassee,” English said. “She is great with children and is very patient with them. Mary Alice is always willing to help when needed. She is passionate about tennis, and it shows when she volunteers. Mary Alice is one of the reasons why we have been successful in Tallahassee in introducing tennis to children who have never played before.”

USTA Florida congratulates Mary Alice Linzy as the April Volunteer of the Month for sharing her love for the game with children in Tallahassee.

If I could play tennis with three people, they would be…”My father who died in 1981; my mixed doubles partner and husband, Michael; and my best friend and partner Wanda Eberhart.”

When I am not playing tennis I am…”Taking orders for my chocolate and flowers company, and taking walks with Michael and my dog Prissy. And rooting for the Florida Gators!”

My best tennis memory is…”As a child, I would go to the tennis court with my dad, who would play doubles with Sybil Ballard, Victor Cawthon and Axex Sutor. The backboard and I were best friends. One Saturday, when I was 13, one of the four did not show up for the group. Mrs. Ballard said to my dad, ‘Let Mary Alice play with us.’ As the saying goes, a star was born. From then on when a fourth was needed, I was asked.”