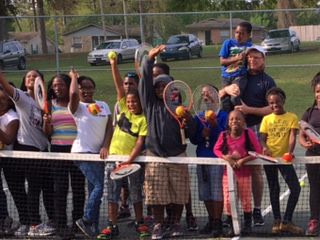 The City of Tallahassee Parks, Recreation, and Neighborhood Affairs hosted a USTA Play Day in Historic Frenchtown on March 29, 2016 for youth of all ages. Play Days are held throughout the month of March to provide an opportunity to welcome new players in a fun setting in order to introduce them to current programs with the goal of increasing participation in those programs.

The city hosted its event in hopes of increasing participation in its after-school program held at Fourth Avenue. The after-school program is organized and taught by Nikki Clifton. More than 30 kids participated in the Frenchtown event with more than 14 volunteers, including Glen Howe representing the city and Dennis Kelley representing the Tallahassee Tennis Association.

While some of the kids that participated in the event live and play in the Frenchtown area, others were bused in from an existing after-school program located on the outskirts of the Florida A&M campus. 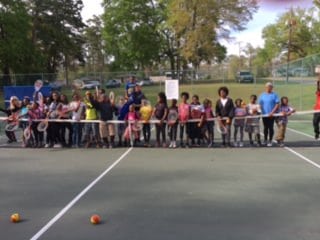 To kick off the event, organizers provided participants with a warm-up followed by the introduction of some basic skills and exciting games on each of the two courts using foam balls. After 30 minutes of competitive play, kids were treated to refreshments and informed of the existing program at Fourth Avenue and invited to return to participate at no cost.

The city hopes to hold similar events at other recreation centers throughout Tallahassee in hopes of growing their after-school tennis programs.