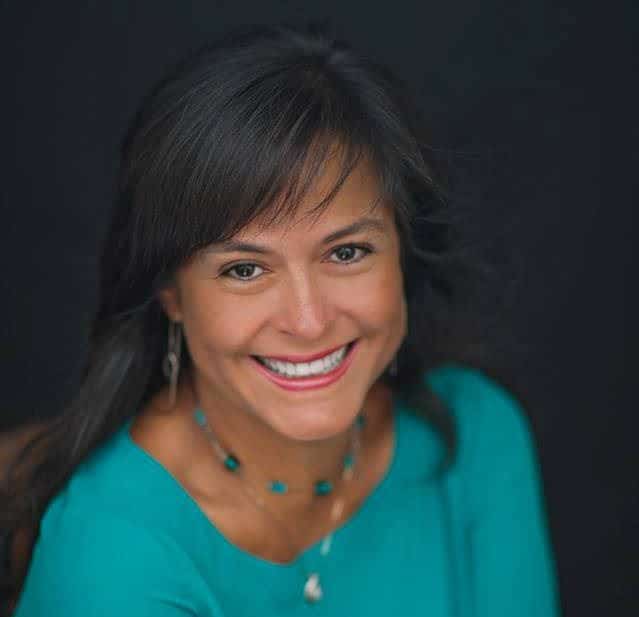 In December we asked for your help in nominating captains, players and volunteers who deserved recognition for their contribution to the USTA League program during the 2017 season. You responded and it’s time to reveal those selections starting with our Captain of the Year.

To put these nominations in perspective you should note that during the 2017 championship calendar, 106 different individuals served as a captain or co-captain of a Leon County team. Forty-two of these individuals captained more than one team during the year.

You captained how many teams?!

Nineteen individuals captained two teams during the year and another 64 captained one team. Thank you to everyone who took on the captain role!

This award is presented to a league captain who displays a high level of sportsmanship and has earned the respect of their players and peers. The captain is knowledgeable of league rules, plays by them, and ensures players on his/her team follow the rules. The captain is respectful of others, has good communication skills with team members and other captains. The captain has made significant efforts to promote fair play for the betterment of an enjoyable league experience. This captain recruits new players to league tennis and encourages continued participation of veteran players.

Notable accomplishments and reasons you believed this person deserves the award:

“On behalf of Mariela Bartens-Santurri’s 40 & Over and 18 & Over USTA teams, we believe she deserves recognition given her devotion to the game of tennis, her outstanding leadership as a captain, her support for her fellow players in the tennis community on and off the court, and her strong sportsmanship. While Mariela has a keen competitive spirit, her first goal is for players to have fun and for play to be fair.”

“Mariela and Rhonda Tullos were recognized this fall for their sportsmanship in leading the new 5.5 Mixed Doubles Combo league. They not only stepped up to captain teams for this league, but also coordinated on lineups so that players played with new partners each week and had plenty of opportunities to play and meet new people.  For their efforts to encourage new players and make tennis fun for them, Bobby York recognized them with a Sportsmanship Award.”

“Mariela encourages player development by arranging regular clinics and practices for her teams throughout the year. Mariela ensures all team members get sufficient opportunity to play and she is always there until the end of each match cheering the team on. When make-up matches are required, she even goes to other team members’ make-up matches even if they aren’t all played on the same day.”

“Mariela is a very organized and efficient captain. She carefully plans for each match identifying not only the lineup, but also designated backups for any given match, so there is no risk of missing out on play because of a team forfeit due to unexpected circumstances.”

“Mariela keeps the team well-informed on pertinent USTA and league issues and knows the importance of good communication with her fellow captains to ensure things run smoothly on match night. She is knowledgeable about the rules and a good role model for playing by the rules. She also gives players the opportunity to get to know each other and have fun off the court with periodic social get-togethers.”

“Mariela led her 40 & Over and 18 & Over teams to sectionals this year and also played on the 5.5 and 6.5 Combo league teams that went to sectionals. And even in the excitement of going to sectionals this summer, on her way home from Orlando Mariela made time to visit a tennis friend who was recovering from surgery.”

How does your nominee give back to the local community?

“Mariela has a big heart and as one team member put it: ‘It seems like every week she is bringing dinner to a sick friend or participating in some type of charitable activity.’ As a member and past president of the Tallahassee Board of Realtors, Mariela has been involved in numerous community outreach programs and has received the Tallahassee Board of Realtors’ Volunteer of the Year Award.”

“She is the founder and chairperson of the Board of Realtors’ Annual Big Bend Habitat for Humanity 5K Run. She participated in her realty company’s pet adoption program, and came home with an adopted dog!”

“Mariela is an annual Salvation Army Bell Ringer. She has organized a fundraiser for Second Harvest of the Big Bend Backpack Program. She has been a fundraiser for the American Cancer Society’s Relay for Life for over 10 years. Mariela helps assemble and serve Thanksgiving meals for those in need. She collected donations for hurricane victims in Texas and Florida.”

Mariela inspires a sense of giving in her team and instead of our usual Christmas gift exchange, this year we got gifts for Toys for Tots. Mariela is very active in promoting tennis in the community and has volunteered at The Challenger Tournament.”

“Mariela is an outstanding captain, putting countless hours behind the scenes and on the court to ensure that tennis is fun, fair and competitive for all players on the courts.

Congratulations Mariela Bartens-Santurri, our 2017 Leon Captain of the Year! 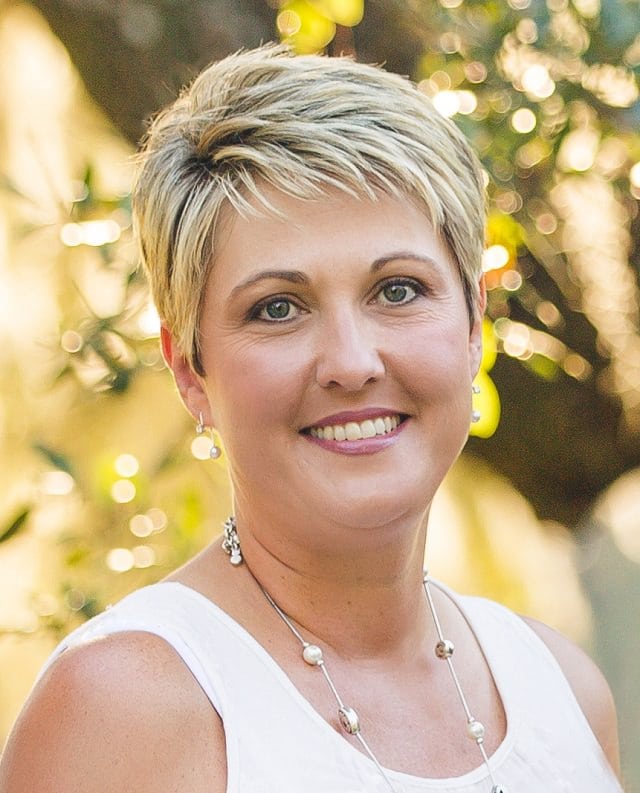 Tallahassee-area USTA Leagues experienced another successful year of growth and participation in 2017. Thank you to all who played during the year!

Continuing our recognition for contribution to the league program, it is a privilege to announce our 2017 Player of the Year.

This award is given to a player active in local USTA Leagues, whose love of tennis is demonstrated not only in competition, but also in commitment, service and inspiration. In naming the Player of the Year, we seek to honor those who, besides achieving outstanding results in local league competition, sectional and national events, served as a model for all of us in their competitive spirit, continuing devotion to the sport, and their support and encouragement of their fellow players.

Two of the teams Rhonda competed on advanced to sectional tournaments. She also competed in two USTA tournaments, winning one and finishing runner-Up in the other. Rhonda and her partners won the 7.0 division of the annual TTA Sweetheart Tournament and won the ladies 3.0 doubles in both the annual Catholic Charities Tournament and TTA Championships. She finished runner-Up in 6.5 mixed doubles in the Catholic Charities Tournament. Rhonda is super competitive, but also wants tennis to be fun first.

Rhonda serves on the B-League Executive Committee for the South Georgia/North Florida Women’s Tennis League, and designed and maintains the league website as a volunteer. She received the Excellence Award at the B-1 level last May and is now competing at the A-4 level.

Rhonda didn’t just play a lot; she captained six of her USTA League teams in 2017. She works hard at planning out her season so that all players on the team play as evenly as possible. She communicates with the team weekly and encourages feedback from her players. She is always respectful of the other teams and notifies captains of forfeits hours in advance if necessary.

In September, Rhonda received a USTA League Sportsmanship Award for her contribution in providing additional opportunities for 2.5 and beginning players to play and improve. She and fellow captain Mariela Bartens-Santurri talked, and in her words, agreed that, “Each week instead of lineups being a big secret, we are going to work together to make sure everyone plays someone new each week. We both want to give these new players plenty of opportunities to play and meet new people. This is why I love tennis!” For the season, she encouraged two couples to join the 5.5 mixed team; it was the guys’ first league matches ever.

Rhonda is an advocate for all Tallahassee-area tennis. She is always encouraging people to get out and play and to join leagues. She loves the competition as well as the social aspect, but never loses sight of sportsmanship even while competing. Rhonda strives for everyone to have fun playing tennis, whether winning or losing.

In the community, Rhonda is a sponsor of the Keys to Exceptional Youth Success organization which ensures that area school students with disabilities can access academic, vocational or other post-secondary learning opportunities.

Congratulations to our 2017 Leon County Player of the Year Rhonda Tullos!

The No. 9-ranked Florida State men’s tennis team is off to their best start in school history. The team is currently 22-1, 6-0 in ACC play, and 14-0 on their home courts. They also lead the country in winning percentage (.957) and wins, and are one of two schools that only have one loss.

During a recent home stand, USTA League tennis had the opportunity to join the team to share the courts. On Friday, March 23, as the Seminoles took care of N.C. State 4-0, USTA Mixed 40 & Over leagues teams faced off at the Scott Speicher Tennis Center. As the evening progressed many other players joined in the fun.

Two days later on Sunday afternoon, March 25, the FSU men knocked off No. 1 Wake Forest 4-3 in an exciting come-from-behind win. During the day local league players gearing-up for the spring season played on the adjacent courts. 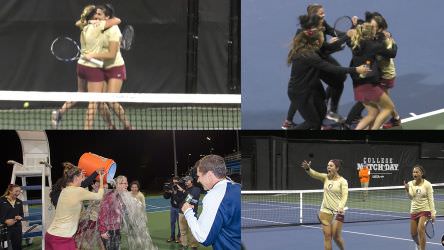 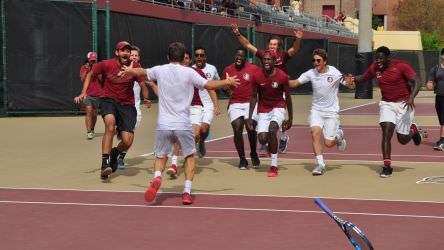 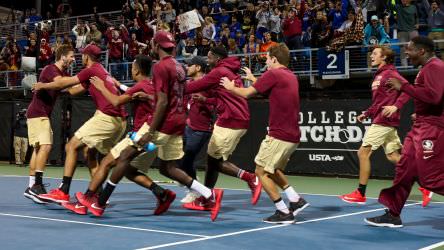 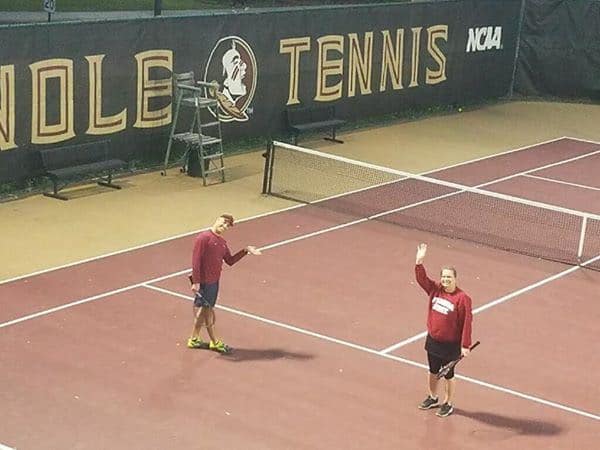 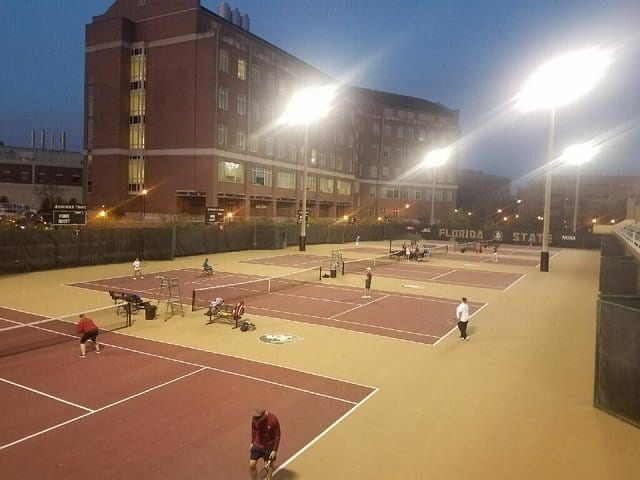 Earlier this season, the Seminoles men and women teams participated in the first-ever college tennis match to be broadcast live on Tennis Channel. The “Fresh from Florida Sunshine Showdown” and College MatchDay event setting was the USTA National Campus in Lake Nona.

Want to keep up with the Seminoles?

For information on local USTA Florida Leagues in Leon County go to www.ustaflorida.com/BobbyYork.