The 7th annual Christmas Connection Tennis Tournament, sponsored by Catholic Charities and the City of Tallahassee Parks, Recreation, and Neighborhood Affairs Department, was held on June 20, 2015 at Forestmeadows Park in Tallahassee.

The Christmas Connection tournament is one of the largest charity events held in Tallahassee each year. 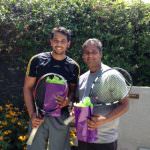 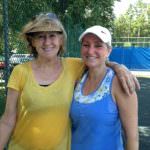 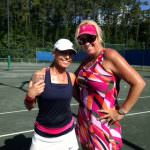 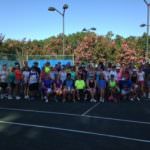 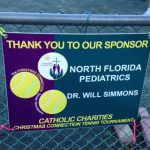 According to Tournament Directors Chuck and Candace Bunker, “The continued success of the tournament is a testimony to the strong support of both the tennis and business communities. The generosity from the players as well as local business owners allow Catholic Charities to continue to administer this vital program. Candace further commented that “it is through the partnership that Catholic Charities has developed with City that helps to make the tournament such a crowd favorite.”

A round robin format, consisting of six game pro sets with no ad scoring, was used for this increasingly popular one-day doubles tournament. The tournament coincided with Father’s Day weekend and allowed participating dads to team up with their children for a fun day of tennis. Approximately 100 players, ranging in age from 15 to 78 and all skill levels participated.

Players were given the opportunity to purchase poker chips to allow them the opportunity to play “Let Agains” (one “Let Again” per game per team), which added to the excitement of the competition. Over $6,500 was raised for Catholic Charities which well exceeded the tournament goal of $3,500, bringing the total raised since the inaugural event in 2009 to over $40,000. Catholic Charities seeks to fulfill the wishes and basic needs of hundreds of needy families from all religions, races, and ethnic backgrounds in Northwest Florida.

In addition, local businesses sponsored individual courts to underwrite the court costs. Due to the generosity of the court sponsors, 100 percent of the player’s registration fees go directly to programs administered by the charity.

A robust silent auction was also held during the day to raise additional funds for the charity. One of the auction items included a week’s stay at a private beach house at St. Teresa that was donated by one of the tournament players, Dr. Will Simmons, who not only was a participant in the tournament but is a leading contributor to the success of the tournament as well as a parishioner of one of local area Catholic churches. Further, over $500 in player prizes was donated by local businesses to help offset tournament costs.