The 5th Annual “Perfect Match” Tournament, using a doubles-only format, was held at Tom Brown Park on May 16, 2015. The proceeds from the tournament went to One Church One Child (OCOC) of Florida, Inc., a nonprofit organization with a primary mission to find families and permanent homes for children waiting in the foster care system. 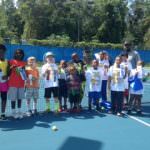 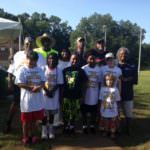 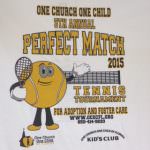 OCOC is funded in part through support from the Florida Department of Children and Families, private donations, grants, and fundraisers. Although Reverend Al Williams, Deputy Director of OCOC, is pleased that the tournament was able to generate more revenue this year, the primary intent of the tournament is “to raise community awareness and involvement in addressing the needs of children who wait for adoptive and foster parents, and permanent families and homes to call their own.”

Tournament Director Lenin Moncherie was very pleased with the increased participation in the tournament over last year, as well as the increased number of volunteers wanting to help.

Special thanks to Mr. Leon Kicks and Mike Tuten for supporting One Church One Child of Florida and its mission for children in care.

An Up/Down exhibition match was played by Sunil Patel and Marlon Toombs against Al Williams and Cory Howard. It was the first time for many to witness up/down tennis which allows players in wheelchairs to compete against able-bodied players. Patel is a nationally-ranked wheelchair player.

For more information on One Church One Child, please visit www.ococfl.org or email OCOC at info@ococfl.org.