This Special Olympic event competition featured track and field events, bocce, soccer, tennis, volleyball, cycling, and more, with an opportunity to advance to the State Summer Games to be in Lake Buena Vista on May 15. 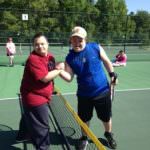 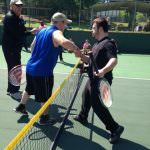 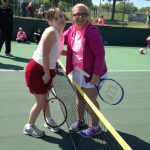 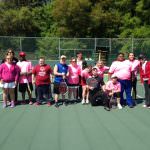 This year’s tennis event saw a brand-new skills and play format that was introduced last year by USTA Florida and the USTA Florida Section Foundation, and adopted by Special Olympics Florida through a landmark agreement with the three organizations. The USTA is providing grants, workshops, and equipment throughout Florida to providers that offer tennis programs to Special Olympic athletes.

“The partnership between Special Olympics Florida and USTA Florida will allow even more athletes with intellectual disabilities to advance their skills and enjoy the game of tennis!” said Leon County Director of Special Olympics Melba Jacobs.

The format this year for the skills competition of the Area 3 Summer Games included the use of red balls on 60’ courts using mini nets. Athletes were given five or 10 points for landing the ball successfully in either the front or back court area. Each athlete received points for five separate attempts for the following skills: forehand groundstroke; backhand groundstroke; forehand volley; and backhand volley. Ten attempts were given to athletes for serves and alternating groundstrokes. Scores were also given for three separate attempts at Ups and Ups with a Bounce. Points were tallied for all of the skills, with first place going to Carrie Beth Smith (Gold) and second place going to Leon Gallon.

Athletes also competed in Red Ball Singles, where matches are played by beginning each point with a “serve” that must be playable. Athletes are given two opportunities to put the ball in play on each point and they must alternate serving after two points have been played. The first athlete to 10 points wins the match.

The new format was initially a challenge for the athletes; however, once the athletes learned to slow down their swing and hit the ball a little more softly, they became much more successful in keeping the ball in play and therefore, more excited about the competition.

For more information about Special Olympics and/or how you can volunteer, please email Melba at melbajacobs@specialolympicsleon.org.