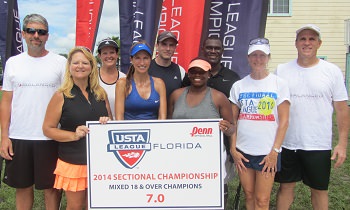 The Tallahassee squad after winning the Florida Sectional this Fall

The team, which played out of Forestmeadows Park in Tallahassee during the regular season, defeated a team from the USTA Missouri Valley Section (St. Louis, Mo.) 2-1 in the 3rd/4th place playoff.

Earlier in the day in the semifinals the Tallahassee squad was edged 2-1 by the USTA Caribbean Section (San Juan, Puerto Rico) which went on to win the championship, defeating the USTA Hawaii Section (Honolulu) in the final.

Established in 1980, USTA League has grown from 13,000 participants in a few parts of the country in its first year, to more than 820,000 players across the nation today, making it the world’s largest recreational tennis league.

Players participate on teams in a league format, which is administered by the USTA through its 17 Sections. The league groups players by using six National Tennis Rating Program (NTRP) levels, ranging from 2.5 (entry) to 5.0 (advanced). USTA League is open to any USTA member 18 years of age or older.

For more info on USTA League in Florida go to our Leagues section today!.