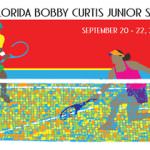 “The CFTOA and Seminole County Parks and Recreation Division are proud to sponsor the sportsmanship awards for this year’s tournament,” said Seminole County Leisure Services Park Supervisor Cindy Harkins. “A player in each division was selected based on their display of outstanding sportsmanship towards their fellow competitors, coaches, officials and spectators and by their actions on court during match play.”

More than 70 nominations were received for consideration for selection by the tournament officials committee.

These players were nominated by several officials and received numerous accolades for their displays of sportsmanship,” said Tournament Director (18s-16s divisions) Brian Morrissey. “They are excellent role models for other junior players and ambassadors for the game of tennis.”

For more information or to see division champions from the event go to Big Names Among Winners at 66th Florida Jr. State Tennis Doubles