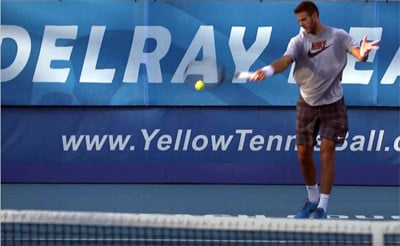 The Delray Beach Open has announced first-round schedules for world No. 3 Milos Raonic and former US Open champion Juan Martin del Potro for the upcoming ATP World Tour event that will be played at the Delray Beach Stadium & Tennis Center on Feb. 17-26, 2017.

If he maintains his No. 3 ranking, the 26-year-old Raonic would be the highest-ranked player in the tournament’s 25-year history. He will play his first-round match on Tuesday, Feb. 21 at 12:30 p.m. in the day session’s feature slot. The Canadian reached last year’s Wimbledon final en route to the highest ranking of his career.

Del Potro, 28, will play in the Tuesday evening prime-time slot at 8 p.m. The Argentine returned to the courts a year ago in Delray Beach from wrist surgery and climbed from a ranking of 1045 to No. 38. He was named ATP Comeback Player of the Year for the second time in his career.

The tournament also announced that the Bryan Brothers, who will be in search of their fifth Delray Beach title, begin that quest on Wednesday, Feb. 22 in the evening’s feature match at 8 p.m.