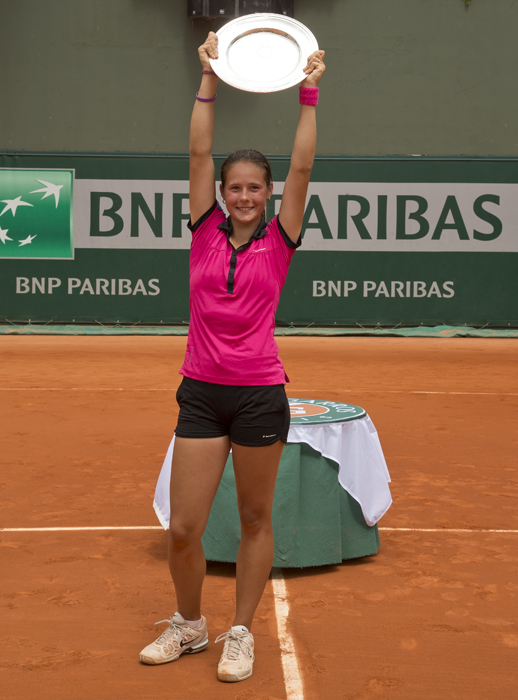 Darya Kasatkina after claiming the French Open girls’ title in 2014

Kasatkina is an impressive 3-0 in ITF finals after Daytona, also winning at Sharm el-Sheikh, Egypt (hard court), and Telavi, Georgia (clay) in 2014. The 17-year-old Kasatkina in the semifinals defeated Sara Sorribes Tormo of Spain, while Mertens beat her doubles partner, Arantxa Rus of the Netherlands, the former No. 1-ranked junior in the world.

“I’m happy to be the winner because this is a very beautiful tournament,” Kasatkina told the Daytona Beach News-Journal. “I like Florida and this club has a nice atmosphere.”

The Russian upset No. 6 seed Laura Pous-Tio of Spain in the first round, and in the second round survived a three-setter against American qualifier and former University of Florida star Lauren Embree. The unseeded Mertens toppled No. 1 seed Michelle Larcher de Brito of Portugal in her opener.

Mertens contested the final despite feeling pain in her elbow beginning late in the singles final.

“I couldn’t give a walkover in the final,” she said. “It was a little difficult to serve, and I felt it on my forehand. (After the first set of doubles) we switched to my backhand side.”

Abaza improved to 7-7 in career USTA Pro Circuit doubles finals, and Marand to 10-9.

With approximately 90 tournaments hosted annually throughout the country and prize money ranging from $10,000 to $100,000, the USTA Pro Circuit is the pathway to the US Open and tour-level competition for aspiring tennis players, and a frequent battleground for established professionals. The USTA Pro Circuit provides players with the opportunity to gain professional ranking points, and it has since grown to become the largest developmental tennis circuit in the world, offering nearly $3 million in prize money. Last year, more than 1,000 men and women from more than 70 countries competed in cities nationwide. Current players Maria Sharapova, John Isner, Caroline Wozniacki, Sam Querrey, Victoria Azarenka and Andy Murray are among the top stars who began their careers on the USTA Pro Circuit.

For more info go to the tournament website at www.ProTennisDaytona.com.