USTA Florida’s mission is “to promote and develop tennis for all.” As a core value, we believe in providing opportunities for everyone to participate in the game of tennis, regardless of skill, age, physical ability, gender, ethnicity, economic background or sexual orientation. As June is Pride Month, we’re taking the opportunity to celebrate the diversity of the Florida tennis community.

Heather and Diane Adkins of Putnam County just celebrated their 8-year wedding anniversary in May. It wasn’t tennis that brought the two together, but an LGBTQ+ event in Orlando several years ago.

“Pride to us means being unapologetically out. We’re now married, call each other wives, and we don’t hide it on or off the court,” says Heather. 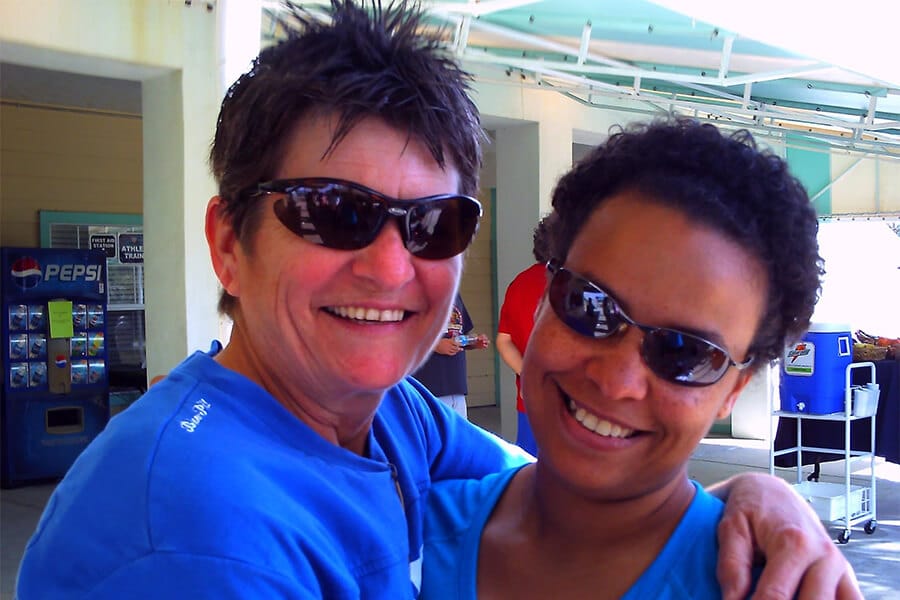 Diane and Heather in Daytona for a Sectionals Event in 2012

Heather got her start in tennis playing in high school, but only picked the sport back up around 2009 when she found a hitting partner in Jacksonville. Now 10 years later, she has been steadily playing USTA as well as with other local teams.

“It is the only sport I really enjoy playing and putting all my effort into,” shares Heather, who had the opportunity to represent Florida at the 2019 Nationals in Oklahoma. “It’s challenging both physically and emotionally and the comradery on the teams is enjoyable.”

Diane caught the tennis bug after Heather persuaded her to pick up a racquet and try it out.

“It’s a sport that can be learned later in life and Diane’s natural athleticism gave her an immediate advantage early on,” shares Heather.

The couple takes on a busy tennis schedule. They both play USTA leagues, local flex, day, and country club leagues in Gainesville and Jacksonville, and even participate in charity tournaments such as Serving Up a Cure. Heather competes in USTA tournaments and travels to play singles and doubles all over North and Central Florida, while Diane uses those opportunities to enjoy more time with her wife.

“Tennis has allowed me to travel with my wife to tournaments and sectionals in Daytona and Orlando, giving us more quality time together,” says Diane. “I’ve also enjoyed being a valued member of my teams and meeting new people.” 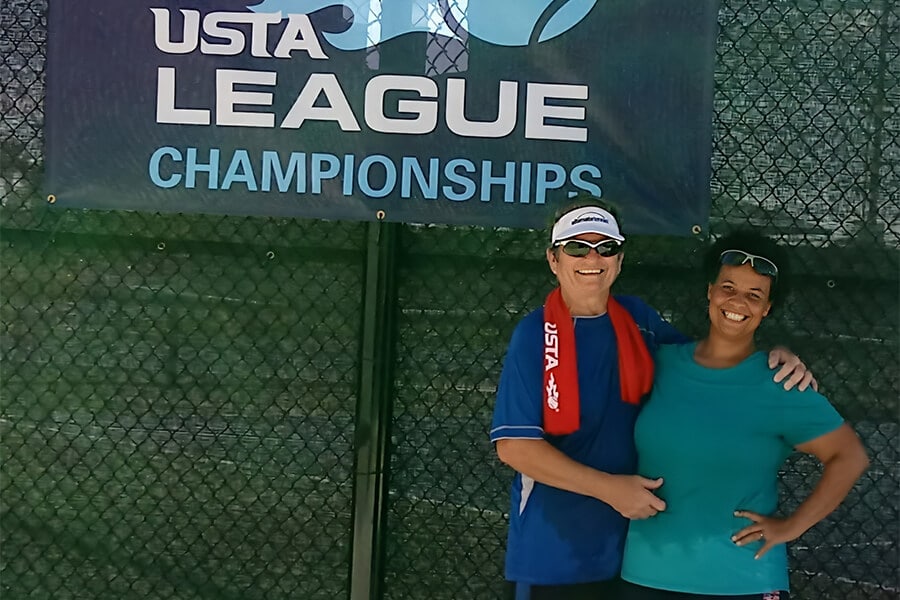 Diane and Heather in Orlando at a Sectionals Event in 2017

When off the court, the couple is plenty active as well. After more than 20 years at the Kennedy Space Center, Diane shifted careers to focus on a longtime passion: resale and collectibles. That led to the creation of Twice Is Nice, a small thrift/resale store owned and operated by the couple in Melrose, Fla. While Diane curates collectibles, household goods, antiques and décor for the shop, Heather manages the books with several years in corporate finance and accounting under her belt. The Adkins also enjoy venturing out into nature as often as possible, where they spent time hiking, biking, and kayaking. Despite running a store and taking time to appreciate the great outdoors, they still always make time for tennis.

“Tennis has played a huge role in my life,” says Heather. “It’s helped me become active, more social and is a fantastic emotional outlet and de-stressor.”

As members of the LGBTQ+ community, Heather and Diane say they’ve been warmly welcomed and quickly integrated into the tennis communities in both Gainesville and Jacksonville.

“The players, pros and facilities have all been wonderful,” says Diane.

While they’ve met several other LGBTQ+ players on the court, the couple says they haven’t necessarily felt that tennis has helped them further connect with the LGBTQ+ tennis community.

“Larger cities have meetup groups or the like to bring the LGBTQ+ tennis community together, but we aren’t aware of any events in our area,” Heather explains. “If there were specific LGBTQ+ events, we would participate!”

The LGBTQ+ community — those who identify as lesbian, gay, bisexual or transgender — are a vibrant, diverse and influential segment of the American population. The Adkins believe it’s important to host events specific to that community because tennis is inclusive for everyone. The lack of LBGTQ+ tennis events in their area is something they hope will change in the near future.

“I believe more LGBTQ+ community members would really enjoy tennis if they were introduced and LGBTQ+ tennis activities, groups, and mixers,” adds Heather. “It would be a fantastic way to introduce new players to the sport.”

USTA Florida believes tennis is for everyone. For more information on how you can support, participate in, or find tennis play opportunities for the LGBTQ+ community in Florida, visit USTAFlorida.com/Diversity.