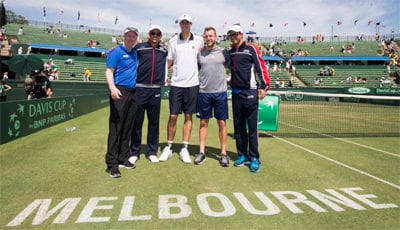 Team USA captain Jim Courier has named world No. 17 Jack Sock, No. 23 John Isner, No. 27 Sam Querrey and No. 28 Steve Johnson to face Australia in the quarterfinals of the Davis Cup, to be held April 7-9, 2017 at Pat Rafter Arena in Brisbane, Australia.

The same U.S. line-up led the U.S. past Switzerland 5-0 in the first round in February.

Australian Davis Cup captain Lleyton Hewitt will field a squad comprised of No. 16-ranked Nick Kyrgios, No. 79 Jordan Thompson, No. 188 Sam Groth, and doubles specialist John Peers. Australia advanced to the quarterfinals with a 4-1 victory over the Czech Republic in the first round.

The winner of the tie advances to the World Group semifinals on Sept. 15-17 against either Belgium or Italy.

“I love being part of a team,” Sock said. “We all get along really well. We’re four very capable singles and doubles players. You see that at the start of the year with Sam winning Acapulco, Stevie and John playing good tennis. We’re all successful doubles players. I like our team a lot.”

Sock and Kyrgios have never met in tour play, while Isner holds a 2-1 career record against Kyrgios.

The U.S. has faced Australia in Davis Cup play more times than any country, holding a 26-20 all-time record against the Aussies in a rivalry that dates to 1905. The U.S. won a 2016 meeting 3-1 in Kooyong, Australia, in the 2016 World Group first round.

Captain Courier announced that Connor Smith will be the practice partner for the U.S. Davis Cup team. Smith, 26, graduated from Ohio State in 2013 after transferring from Florida State following his sophomore season. He went 36-7 in singles and 33-7 in doubles during his senior year. Smith holds six USTA Pro Circuit/ITF Circuit singles titles and 14 doubles titles, including two captured earlier this year in events held at the USTA National Campus. He is ranked No. 329 in the world.