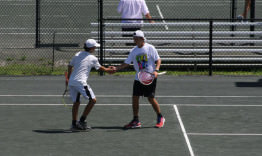 The top junior tennis players in the state of Florida will take to the courts this weekend to determine the year’s state doubles champions when the 66th USTA Florida Bobby Curtis Junior State Doubles Championships is held on Sept. 20-22, 2014, at Sanlando Park in Altamonte Springs (18s-16s age divisions), and at the Florida Tennis Center in Daytona Beach (14s-10s divisions).

The USTA Florida Bobby Curtis Junior State Doubles Championships represents some of the best junior tennis players in the strongest of the 17 USTA sections across the country. It is one of the few major tournaments in the country that combine boys’, girls’, and mixed doubles in the same event.

Miami’s Adriana Reami and Russo, who will be competing in the Girls’ 18 Doubles, won a USTA Gold Ball this summer at the USTA Girls’ 16 Nationals.

Former world No. 1s Chris Evert, Andy Roddick and Jim Courier are among the players that have raised trophies in singles at the USTA Florida Bobby Curtis Junior State Singles Championships, previously known as the USTA Florida Jr. State Closed. Florida’s top event was renamed to honor the legendary Florida junior tennis organizer Bobby Curtis in 2012. The tournament is annually a launching pad for future college stars and pros.