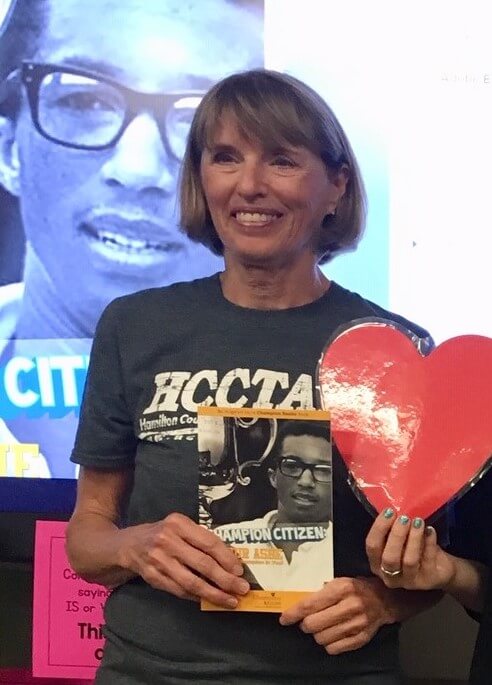 Florida gained an exemplary tennis volunteer when Helen Moser Petersen relocated from Indiana to Bradenton. There she picked up her almost life-long work in youth guidance and tennis via education, and bringing her inspirational book series to the Sunshine State.

Through original funding from the Hamilton County Community Tennis Association (HCCTA) in Indiana and the national USTA Foundation, she created a reading program called Champion Reads, consisting of seven chapter biographies of athletes who overcame challenges to champions and subsequently devoted their lives to helping others: Arthur Ashe, James Blake, Jean Driscoll, Billie Jean King, Sam McNew, Gale Sayers, and George Taliaferro. The books also include 36-page teacher guides which cover various school subject areas. More than 31,000 of the books have been read by all ages all over the country.

“Arthur Ashe is the reason I started the whole Champion Reads program,” Petersen said. “About 15 years ago a high school tennis coach at my daughters’ high school asked me why I became a tennis volunteer. My reply was, ‘That’s easy — Arthur Ashe and Barbara ‘B.B’ Wynne.’ B.B. is a legendary tennis volunteer in Indiana and the USTA, so the coach understood that. Then he looks at me and says, ‘Arthur Ashe? Isn’t he the black player who died of AIDS?'”

When she realized there was a generation of coaches and players who were unfamiliar with Ashe as a humanitarian who broke racial barriers, worked to end segregation across the globe, founded the National Junior Tennis and Learning network (NJTL), and until the end of his life was active in civil rights. She set to work on educating new generations about Arthur Ashe.

She worked with the HCCTA to buy $1,000 worth of copies of Ashe’s memoir, Days of Grace, which he had finished writing less than a week before his death. She gave copies to high schools and libraries around Hamilton County, located just north of Indianapolis.

“People read them for a year, and then we had a community discussion,” Petersen said. “I flew in a woman, Chris, who was exactly the same age as Arthur. She and Arthur grew up playing the junior circuit together, and she is still one of Jeanne Ashe’s closest friends. Chris, B.B., Arthur and I were involved in the first NJTL chapters, so I had known Chris for decades, too. For the next five years after the purchase of Days of Grace, HCCTA bought $1,000 worth of books and we had community discussions.”

Now Petersen has brought her reading program to Florida and the Bradenton/Sarasota area.

“I read the book and did educational activities with the students,” she says. “Each student received an Ashe bookmark and a used tennis ball with this message: ‘Don’t judge this ball by its appearance — it can still bounce higher and create more fun to anyone who picks it up — whether you play tennis or just love playing catch with your friends.”

She says the creation of the seven books in the series was made possible by grants from the USTA Foundation, which last year during the US Open had 125 copies of her book on Ashe in the USTA President’s Suite. This was during the 2018 Arthur Ashe Kids Day to commemorate Ashe’s 50 anniversary of winning the US Open men’s singles title.

In addition to book stores, the books are sold on Amazon.com, Barnes & Noble’s website, as audio books on Apple’s iTunes, and just about every other outlet.

A tennis volunteer and USTA tennis player for 43 years, Petersen says she looks forward to bringing Ashe’s message, and the messages of other champions who overcame adversity, to Southwest Florida.

“I realized I needed to create books for elementary students so the legacy of these athletes would be told to young children,” she says. “As Arthur often said, ‘Tennis is just the hook to teach people about the more important things in life.’ This year is the 50th anniversary of NJTL. As you know, tennis changes people’s lives!”

USTA Florida congratulates Helen Moser Petersen as the 2019 Florida Tennis Volunteer of the Month for March,
and thanks her for educating and changing the lives of young people in the Bradenton/Sarasota area, and with her books across the U.S. and the globe.

My earliest tennis memory was…”saving my 25 cents an hour baby-sitting money so I could buy a $3 racquet at our variety store and then hitting the ball against my grandpa’s barn door.”

If I could play tennis with three people, they would be…”My two daughters and two grandchildren.”

When I am not playing tennis I am…”organizing Champion Reads programs and events.”

I like to volunteer in tennis because…”as Arthur Ashe often said, tennis is the hook to teach people about more important things. I am a former English teacher and love tennis. Champion Reads is the perfect merger of my two passions.”