They were representing Club II in Gulf Breeze, Fla., but the ladies from Escambia County at last month’s USTA Florida Adult 18 & Over League Sectional Championships in Daytona Beach had another thing on their mind besides victory — 12-year-old Bennett Rhone of Pensacola.

“The whole team was wearing bracelets and t-shirts and obviously were moved by his courage,” said USTA Florida leagues volunteer Clark Higgs. “The Pensacola group is great and very supportive of the local players and families.” 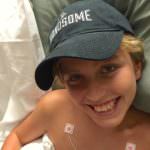 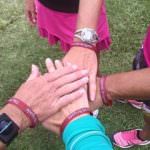 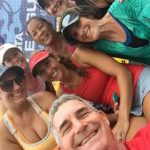 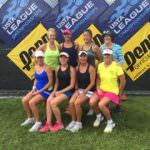 The red bracelets let everyone know that captain Jena Wise and her team were playing for Bennett, who weeks earlier had been diagnosed with Ewing Sarcoma in his rib cage.

“Most of the team members are friends of Erin Rhone,” said Pensacola USTA Florida Local League Coordinator Terry Thrash. “The team and a great deal of the tennis community is wearing the Bennett Brigade bracelet, including me and all the other Roger Scott Tennis Center pros. Another team, of ladies that played at the Florida sectional championships also wore the bracelets and had special uniforms created to support the Rhone family. Erin Rhone was the original captain of that team. However, she could not fulfill those duties because she was with Bennett [at the hospital] in Gainesville. Kim Andrews stepped in and assumed those captain duties.

“Bennett loves tennis, always has a smile on his face, even through this battle,” Thrash added. “Bennett, mom Erin and dad Ethan all love tennis. Bennett plays in the USTA Junior Team Tennis programs and is also in my weekly junior clinics.”

“We’re overwhelmed by all the support and just the love of the tennis community around here,” Bennett’s mother Erin told the Pensacola News-Journal. “I’ve been in Pensacola about 14 years now, and up until three years ago, I didn’t play tennis. I have to say 90 percent of my friends have come through the tennis community here, which is pretty amazing. The outreach has been really touching.”

Thrash says the support continues for Bennett as he enters additional chemotherapy and possible surgery. Ewing’s Sarcoma is a bone cancer found in only nine to 10 out of a million individuals in Bennett’s age range (10-19) in the U.S.

“A quilt was made for Bennett, many care packages have been created, including a care package that was put together by the USTA Florida staff that I delivered it to his hospital room at Shands Children’s Hospital,” Thrash said. “Newk’s Restuarant is having a special Bennett Day, where a percentage of sales go to the family. The Pensacola tennis community is truly a family, and we bind together to help one another.”