My friend and mentor of almost 35 years, Skeeter Carson passed on last Friday. In the early days of University of West Florida tennis when they were an NAIA school, individuals could recruit and scout for players. Since I was traveling around the state with junior tournaments, I talked to a lot of players for “Coachie.” The following piece is from the Pensacola News Journal on Sunday November 16, 2014. 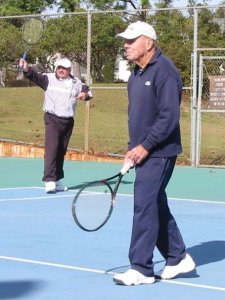 Pensacola’s tennis community lost an iconic figure.
Ralph “Skeeter” Carson, who built the University of West Florida (UWF) tennis program from its inception in 1981 into national success, as well as helping to advance the sport in the community, died Friday November 14, 2014 in Pensacola.

Carson was UWF’s first men’s and women’s coach in 1981 when the school began competing in the sport. The Argos were perennial contenders in the NAIA national rankings and tournaments and later the NCAA Division II.

Carson was replaced after his retirement by Derrick Racine. The two remained close throughout the latter years of Carson’s life. Racine led UWF to its third men’s NCAA Division II national title in 11 years last season.

“He was a legend in Pensacola tennis,” said Racine, who last visited Carson three weeks ago in a local hospital. “The last year or so, he was going to downhill so fast it was sad to see. He was such a great mentor to me. He poured everything he had into the program.”

Said UWF athletic director Dave Scott, “Coach Carson was a great mentor and friend He was a part of the foundation of this organization, and you can see his influence on our teams and coaches today. He will be missed, and it is a sad day for the Argonaut family. Our thoughts and prayers go out to his family.”

All pictures for this segment courtesy On the Coast Magazine.

On October 30th, Pat Markey, Tennis Director of the Destin Recreation Department, with the help of his fellow city co-workers in the park and the rec department, a large group of area tennis pros, volunteers, teachers and 806 kids from Destin Elementary School, the world’s largest tennis lesson was claimed from England by the City of Destin and Destin Elementary School. The paperwork has been submitted and approval is pending from the Guinness Book of Records people.

This writer went to the event with intention of documenting all the proceedings but was conscripted to teaching on a court when one volunteer was unable to attend.

What fun it was with enthusiastic but not rowdy students. After all the kids, K through 4th grade, were posed for a group picture – a wonderful job of organization by the teachers – they followed their teachers to over 48 stations where they were greeted by friendly volunteers and tennis pros including former world #2 tennis player Andrea Jaeger, who coached the children in basic tennis skills in order to make this world record tennis lesson a reality.

Jaeger leads students through the paces

Markey secured local business sponsorship such as Merlin’s Pizza, who paid for over 900 shirts, and the grant from the USTA Florida Section Foundation who provided $3,500 worth of equipment for the lesson with the idea that the equipment would be used at the schools for teachers after the fact. He also secured support from USTA Florida, Signchick Signs, Destin Wedding Company, Destin videographer and On the Coast Magazine.

When asked about the event, Markey stated, “All the effort that went into this project was worth it when we saw those kids jumping for joy. And then to top it off, I’ve had parents contacting me all weekend to sign kids up for tennis lessons. The rebirth of tennis here has begun. Mission Accomplished!” 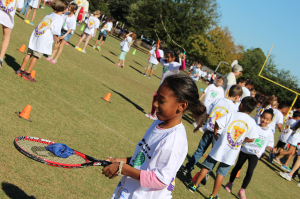 Having a ball at the Destin world record attempt 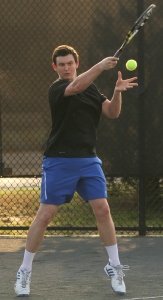 Bernstein, among the Top 10 finalists from the state of Florida, is a multi-sport athlete for the Wildcats that competes in golf, basketball and tennis.

The Wendy’s High School Heismann award is intended to honor the spirit of the Hesiman trophy, which is the pursuit of both athletic and academic excellence.

From www.wendysheisman.com, “The leadership award-honorees are well-rounded young men and woman who excel in learning, performing, and leading in the class room, on the field and in the community.”

One boy and one girl from each state will be selected to advance to the region-selection round and, finally, the national-selection round — whose winners will attend Heismam weekend in New York City in December. 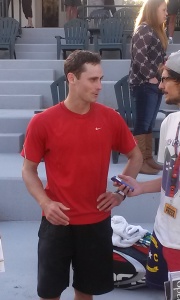 Meanwhile, in the far North of Europe, Destin’s Alexa Guarachi won two $10,000 doubles titles on the ITF Women’s Pro Circuit in Oslo, Norway, one in October and one in November. Guarachi was a $10,000 singles title earlier in the summer in Vancouver.

Spencer was a terrific junior player when living in the Panhandle and training at Sandestin. He was also an All-American at the University of Georgia. Spencer, who is currently teaching tennis in North Carolina and has not played a competitive tournament in almost two years, will start a full-time pro career in January of 2015.

In the Bluewater Bay Futures, Spencer won five wildcard tourney matches then five more main draw matches, including the defeat of #2 seed Peter Heller of Germany in a three-hour-plus match. He also beat #3 seed Jean Yves Aubone of Miami along the way to the finals. 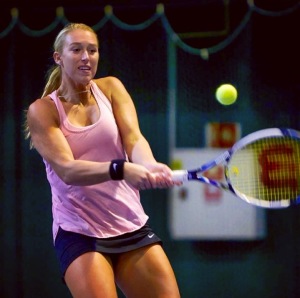 Guarachi, who was an All-American at the University of Alabama two years ago has been playing on the ITA Women’s Pro Circuit for a little over a year. She has been in seven doubles finals, winning three and three singles finals winning one.

The local fans of these two terrific players and people appreciate the awesome tennis they are currently playing. 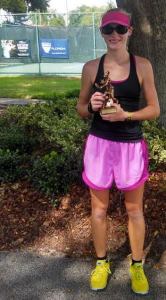 Although Weaver had a couple of close matches in the 64 player draw, the final was not one of them.

The first year of the Girls 14 has been a good one so far for the Pace 8th grader as she has attained a ranking of #5 in Florida. With her hard work and determination, she should continue to improve her game.