Goyins was spectacular in her play, losing only one set in the semifinals to Palm Coast’s Tatyana Leontyeva 2-4, 4-1, 7-4. In her other three matches Goyins won in straight sets, losing only five games including a 4-2, 4-0 match against 3rd seeded Sofya Vinogradova of Miami Beach.

Great tournament Gabby. The Panhandle is proud of you.

Three Panhandle boys played in the Boys 10 and Under division. Noah Strickler of Miramar Beach was 1-2 in tourney play while Pensacola’s Benjamin Ling and Destin’s Gates Chipser were 0-3.

One hundred ninety-seven pounds of food and $960 in donations were collected during the First Annual Tennis Marathon to benefit Manna Food Bank. The new event on the Pensacola tennis scene occurred on Nov. 5, 2016 and was held from 11 a.m. to 9 p.m. on the clay courts at Roger Scott Tennis Center. 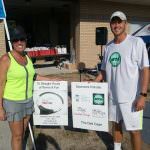 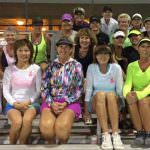 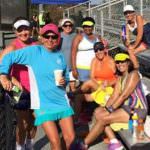 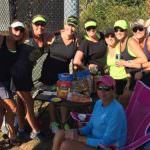 Even More Marathon Players with some repeats.

The event was the brainchild of Pensacola musician and tennis player Constant Change, and local tennis professional William McClelland, owner of the McClelland Tennis Academy, was enlisted to help facilitate the format and play.

Thirty four women were divided into four teams and played timed matches for the 10-hour event. Points were awarded for games won during the time limit. The ladies lasted all 10 hours and played more than 500 games! There were some tired puppies by evening!

Food and beverages were available for the players during the whole event. Constant Change’s Band provided musical entertainment.

Unseeded Hayden Essary defeated fellow Breezer and top-seeded Collin Scheufler 7-6, 6-1 to win the Boys’ 18 title. Neither Essary nor Scheufler lost a set before the finals.

Caraline Scheufler, sister of Collin and unseeded in the Girls’ 18, lost only four games in three matches to win her title. Scheufler defeated Callie Ware of Shoal Creek, Ala., 6-2, 6-0 in the final.

Meyering beat No. 1 seed Luke Beckendorf of Madisonville, La., 6-3, 7-6 in the quarterfinals before falling to Mills in the semis. Kizilbash was also in the Boys’ 14 singles.

Niceville’s Rachel McMullan won her first round match in the Girls’ 14s then lost a close 6-4, 6-4 decision to top-seeded Marleigh Green of Orange Beach, Ala. McMullan then proceeded to reel off five victories in the consolation draw including a 7-5, 6-3 win over No. 3 seed Julianne Legg of Mobile in the final.

Pensacola’s Nicholas Herman and Max Frederick also played in the tourney in the Boys’ 10.

The 44th Annual Sandspur Mixed Doubles Championships was held Nov. 11-13, 2016 at the Shoreline Tennis Center in Gulf Breeze, Fla. Although a far cry from the largest Sandspur (96 teams), this year’s event had 20 teams and nearly every match was very competitive.

Ever since Hurricane Ivan, the Sandspur’s draws have been a little smaller than previous years. When the Sandspur had those really big draws, there was no myriad of USTA League events to impact the draws. 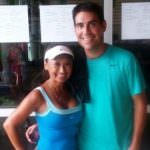 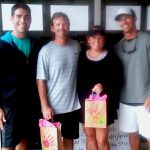 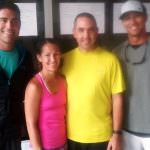 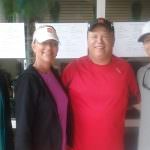 Tournament director, Whitney Man, put together a really good event and everyone got to play four matches. As usual plenty of food and drink was available throughout the event. Friday evening featured a taco bar, Saturday’s lunch was chicken alfredo and Sunday’s lunch offered up a bar-be-que bar. On both Saturday and Sunday, a breakfast bar of yogurt and bagels got everyone fueled up. All the delicious food was catered by Whitney’s wife, Kaya. 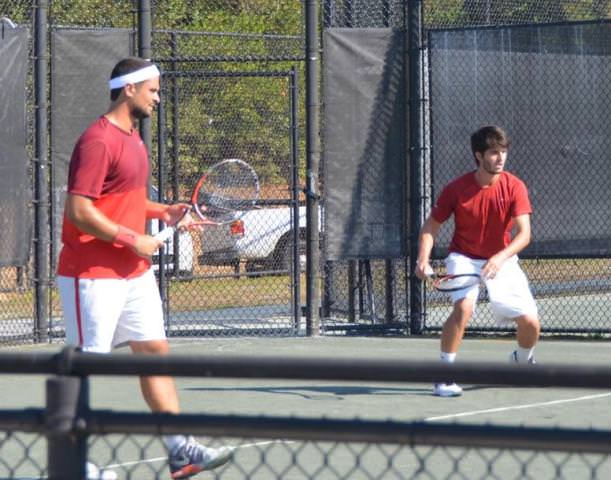 The University of West Florida (UWF) doubles team of Pedro Dumont and Alex Peyrot are having quite a fall tennis season.

They won the Oracle Division II doubles title in Arizona earlier this fall, and as wild card entrants to the $10,000 Pensacola ITF Futures made the finals losing 7-5, 6-3 to No. 2 seeded Dominic Cotrone and Robert Galloway.

This was the second straight year that a local team made the doubles final. In 2015, UWF Assistant Coach Bruno Savi and Pensacola Catholic high school player Chris Ephron, now at Northwestern University, also made the finals.

Dumont and Peyrot were also named the No. 1 team in the Fall Oracle ITA Division II Doubles Rankings.

For almost three weeks men’s professional tennis was played in the Panhandle, first in Niceville (Nov. 7-13) at the Bluewater Bay Tennis Center, and then in Pensacola (Nov. 14-20) at the clay courts of Roger Scott Tennis Center. Both events held local wild card qualifying events in addition to the official qualifying singles event and the main singles and doubles events for each tournament. Both the $10,000 ITF Niceville Futures and $10,000 ITF Pensacola Futures featured young upcoming professional tennis players from all over the world.

Several current Top 25 players in the world have previously played in Pensacola. In 2010, the USA’s Jack Sock (currently ranked No. 23) while in 2013, Alex Zverev of Germany (currently No. 24), and many years before them No. 20 Ivo Karlovic of Croatia all plied their trade in Pensacola. It was the consensus around the grounds of Roger Scott Tennis Center that the next real deal was 16-year-old Felix Auger-Aliassime of Canada. In Pensacola, Auger-Aliassime lost in the quarters 7-6, 6-4 to the eventual winner, No. 2-seeded Gianni Mina. He and doubles partner Patrick Kypson (USA) beat the No. 1 seeds in the first round, then lost. In Niceville, Auger-Aliassime and Kypson won the doubles 7-5, 6-1 over Patrick Daciek and Dane Webb, both of the USA. The week before Niceville, Auger-Aliassime won the singles title at the $10,000 Futures in Birmingham, Ala. He’s 16 years old, the real deal. 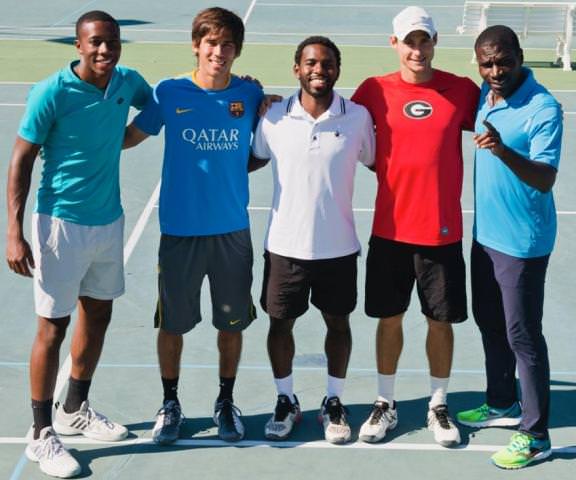 Then some of Futures pros did several other events at Roger Scott. They played a pro-am with local players, held a ladies clinic and hosted 95 kids from Cordova Park Elementary School for clinics and lunch, and to watch professional matches. These events were all a part of the community outreach of the Futures tournament. 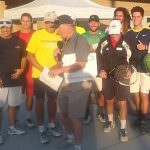 Skip Vogelstang with mic and the Pro-Am Players. 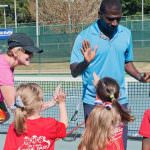 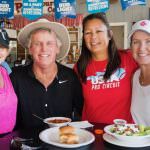 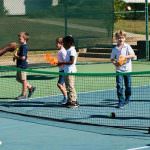 Area players Wil Spencer (Destin), the No. 4 seed, and UWF’s Warren Kuhn played in the singles while UWF assistant coach Bruno Savi teamed with Spencer in the doubles of the Pensacola tournament. Spencer, the No. 4 seed in singles, and Savi also played singles and teamed in doubles in the Niceville tournament. 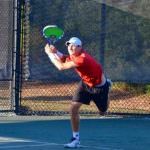 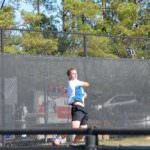 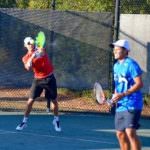 This was the 31st year of one of the area’s oldest continually-running tennis tournaments. Winners were crowned in 12 different divisions. Singles players were guaranteed two matches while doubles teams were guaranteed three matches. Players received t-shirts or candles plus enjoyed a $4 food coupon each day at the food service truck (awesome hamburgers) of the Pensacola Futures Tournament and plenty of fresh fruit and beverages. 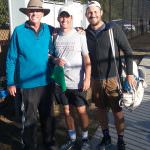 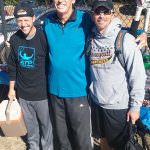 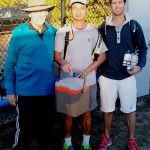 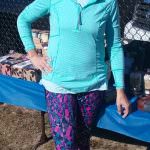 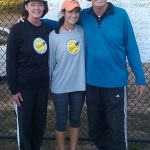 For the past two years the Clay Court City Championships have been held on the last three days of the $10,000 Pensacola Futures Men’s Professional Championships, which provides nice crowds for the pro matches while local players are waiting for their next city match.

Division winners were as follows:

Gulf Breeze’s Hayden Essary and Pensacola’s Jacob Baehr were awarded scholarships by the Youth Tennis Foundation of Florida (YTF) to the Ed Krass 28th Annual College Tennis Exposure Camp to be held Dec. 3-4, 2016 at the University of South Florida. 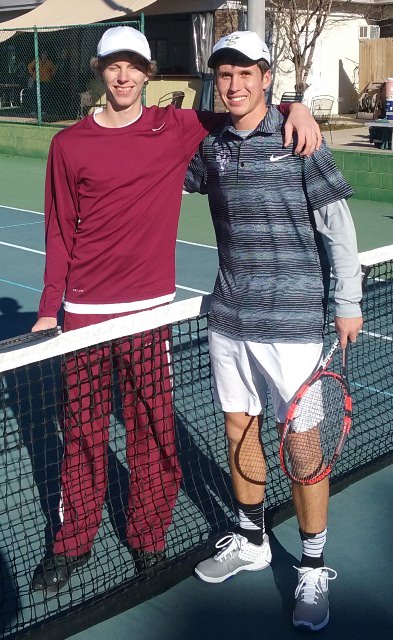 The College Tennis Exposure Camp, the only one of its kind in the country, is dedicated to preparing high school student-athletes for college tennis. The staff, which consists totally of current head men’s and women’s college tennis coaches, is committed to helping their students make the transition from junior tennis to college tennis a reality.