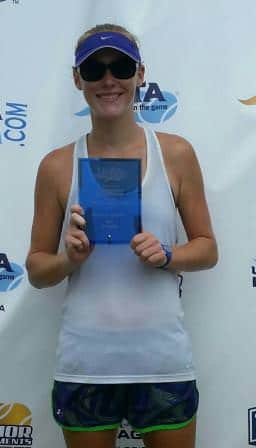 Weaver defeated Nina Gulbransen (Boca Raton) 6-3, 6-4 in the quarterfinals of the 64-draw event. She lost to #3 seed Imani Graham (St. Johns) 6-3, 3-6, 6-1 in the semifinals before defeating Abigail Rencheli (Sarasota) 6-4, 6-4 for third place. Rencheli had a terrific tourney making the semifinals unseeded.

This event included 512 players from around Florida, and just getting invited is an accomplishment. Five more players than last year were accepted into the 2016 state championships. Congratulations to all!

The 2016 Annual Racquet Round-Up, a free Pensacola Sports event, was held at five locations around the greater Pensacola area in the month of June and reached more than 700 kids, most of whom it was their first tennis experience. 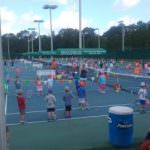 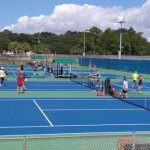 
The event kicked off at the Roger Scott Tennis Center in Pensacola where at least 200 kids per day were at the three-day event. Racquet Round-Up moved to the Naval Air Station Pensacola for a day on June 8th followed on June 9th at Hollice T. Williams Park in Pensacola, and June 16th at the University of West Florida. The program ended up at the Shoreline Park Tennis Courts in Gulf Breeze on June 23-24.

Each day there were two divisions of kids ages 4-8 and 9-12. Area tennis pros and volunteers under the direction of Pensacola Sports’ Taysha Blessington guided their charges through drills and games all using the tennis rackets and balls for the appropriate age and sized kids.

Catholic High’s (Pensacola) Elizabeth Nowak and Gulf Breeze High’s Hayden Essary were named the Pensacola News Journals Spring All-Area female and male Players of the Year for 2016. Nowak played #1 singles at Catholic and helped the Crusaders reach the second round of the Region 1-1A high school championships. 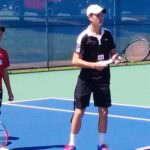 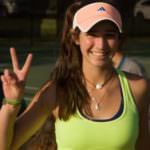 By virtue of Nowak’s winning the #1 singles and the #1 doubles with Frances Taylor, she went to the State High School Individual Championships.

Essary’s Dolphins lost in the regionals but he won the #1 singles and with partner Joel Boles the #1 doubles and also played in the state high school championships. 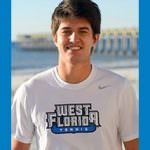 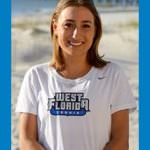 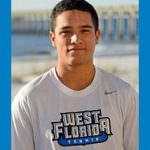 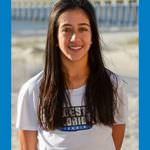 Senior Pablo Borrero and junior Alex Peyrot were unanimous selections onto the six-member men’s tennis squad. Borrero completed his final season in Pensacola with a 3.69 GPA in global marketing. Peyrot earns the honor for the second-straight year and has a 3.42 GPA in economics.

2016 GSC Women’s Tennis Player of the Year Katarina Dikosavljevic and Sarai Flores are among the six student-athletes on the women’s tennis Academic All-GSC Team. Dikosavljevic has a 3.47 GPA in business administration and Flores carries a 3.74 GPA in psychology. The UWF duo were the only two seniors on the list.

The Spring All-Academic Teams were selected by the GSC Sports Information Directors (SIDs) and Faculty Athletic Representatives (FARs) in a joint vote. Nominated student-athletes must have an overall grade point average (GPA) of 3.20 or better on a 4.00 scale for their entire academic career and may not be freshmen or first-semester or quarter transfers.

The student-athlete must be a significant contributor to the squad. Other factors include leadership, community service and extra-curricular activities. SIDs and FARs are not allowed to vote for their own student-athletes. The number of student-athletes selected in each sport is determined by the number of positions normally involved in the playing of that sport. Ties are not broken.

Destin’s Wil Spencer has decided to hang it up from the ATP World Tour men’s pro circuit.

A former Top 10 junior in Florida, a former #1 player for the University of Georgia and the winners of several singles titles on the Futures and Challengers tours including a very exciting Futures championship in front of home town fans in Niceville two years ago, the financial challenges as well as the constant grind of the world circuit became just too much. 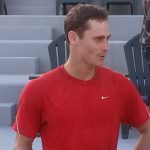 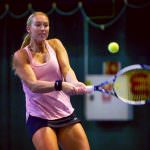 Having no sponsorships other than local donations which got him through nearly a year and half on the tour, there were just too many obstacles to overcome despite the obvious talent.

Wil gave it his all every time he went on the court. His talent and determination are appreciated by all the Panhandle tennis fans. Spencer will be successful in whatever his next endeavor is.

On a happier note, Destin’s Alexa Guarachi, the former University of Alabama tennis star and the highest-ranked female ever from the Panhandle on the WTA tour, is working to return from a knee injury and plans to rejoin the Futures/Challengers circuit in the fall. 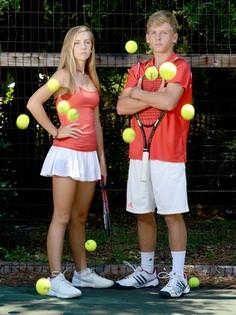 Jefferson and Jillian Hobbs have been named the male and female High School Tennis Players of the Year by the Northwest Florida Daily News.

This is the second consecutive year for the pair to earn the award.

They have been the talk of Ft. Walton Beach tennis since they moved to the area from Clayton, N.C.

Jillian won the regional singles title and advanced to the state individual championships. 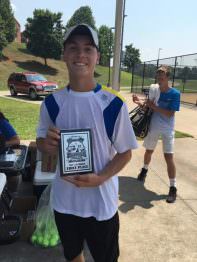 Essary Wins Boys at Battle of Kennesaw Mountain in Georgia

There will be more results of Panhandle players getting great results from out of the area in the July blog.