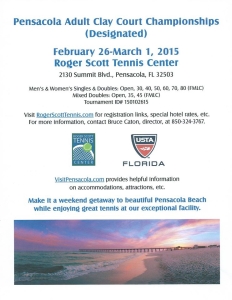 The Pensacola Adult Clay Court Championships has been added to the USTA National 500 list for the 2015 season.

This means that players in the Men’s and Women’s Open draws will receive points towards getting accepted in Futures or Challengers or other professional tournaments.

Plan to come play and see our wonderful beaches.

Men’s 8.0 55 and Over Make Nationals in Arizona

The Men’s 8.0 55+ team from Tops’L Beach & Racquet Resort in Destin had an unusual trip to the USTA League Nationals back in November 2014.

The team from Okaloosa/Walton counties swept their Flight 3 preliminary round robin 4-0. They defeated Leon, S. Miami-Dade and Alachua by the score of 2-1, and downed Indian River 3-0. The No. 2 doubles team of Lyle Sandquist and Jim Kiesby won all four of their matches in a third set tiebreaker! The last match of the round robin, Sandquist and Kiesby were down 2-9 in the tiebreaker but pulled out the victory. 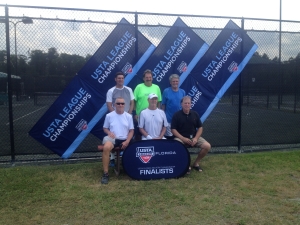 In the semifinals, the Tops’L team beat the Strand 2-1 setting up a final against Broward. The magic ended 2-1 with a Broward victory.

But Wait! With some dissension in the ranks, Broward decided not to go to USTA League Nationals and the Tops’L men went to Surprise, Arizona to represent Florida.

The Tops’L team was undefeated, 8-0, locally against Sandestin and Bluewater Bay.

Team member, Lyle Sandquist, commented, “It was quite an honor to represent Florida in nationals and the first Tops’L team to ever advance to Nationals.” 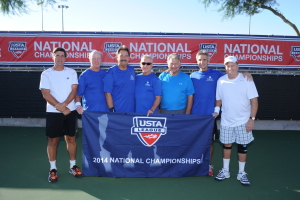 On Friday, December 12th TOPS’L hosted its annual Toys for Tots charity event for our local community for families in need during the holiday season. With over 30 players bringing multiple toys for admission to the round robin event, it was a great afternoon of tennis with sunny skies and temperatures in the mid 60’s. Who could ask for anything better here in the Panhandle? 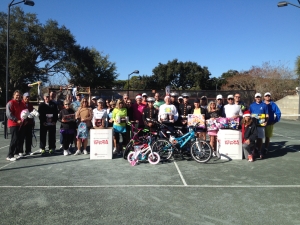 The event also featured three U.S. Marines as special guests that came dressed in their uniforms for the group photo and to thank everyone for participating. Then the Marines suited up in tennis togs and joined in the round robin. Of course at the end of each great event, everyone went to the TOPS’L Club Tiki bar to celebrate with a few libations.

Throughout the last couple of weeks before Christmas over 150 toys and 10 bikes were donated between the drop off boxes and the tennis event making this one of the most successful Toys for Tots drives to ever. Tops’L Director of Tennis, Joe D’Aleo, thanked everyone for their support.

“This is one of my favorite charities during the year to know that we were able to put a smile on a child’s face that might not have gotten a toy Christmas morning,” said D’Aleo. 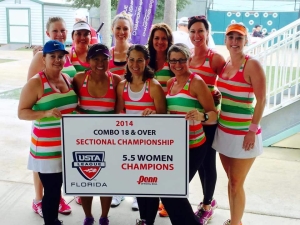 The ladies from Roger Scott Tennis Center only lost one individual match on their march to the championship, and that loss was in a 3rd set tiebreaker. In the preliminary round robin competition, the team did not lose a set and only lost 21 games in three team matches.

Escambia defeated Marion-Ft King, Brevard and S. Miami-Dade all by a 3-0 score. In the finals the locals defeated Leon/Howard 2-1.

Congratulations ladies on an outstanding performance! 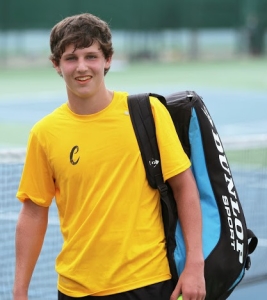 All in all, it was an outstanding effort from the Pensacola Catholic High Junior.