All three players contributed to their teams’ success with wins that should help both their Florida and National rankings. As the summer USTA national tournament season swings into high gear, these three should get more opportunities to improve their game and represent our Section. It should be noted that these three junior players are excellent students as well as athletes and terrific kids. 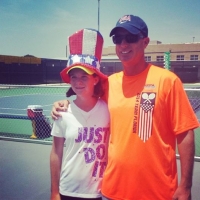 Michael Edge, boys and girls tennis coach at Washington High School and director of junior tennis at Roger Scott Tennis Center in Pensacola, was one of the team coaches at the Boys and Girls 14 Zonal event in Arlington.

Jackie Kasler from Gulf Breeze finished a sterling career at Auburn ranked fourth with 78 doubles and 74 singles career victories, which ranks as the fourth-most and sixth-most respectively in Auburn history.

Kasler posted a 16-11 overall record in singles this season and finished 19-16 in doubles including a 17-13 record with Jen Pfeifler also of Gulf Breeze. Kasler and Pfeifler were ranked #73 in doubles. Auburn finished the season at 17-11 ranked #27.

Jen Pfeifler, a junior from Gulf Breeze, compiled a 14-8 overall record insingles and an 18-17 overall record in doubles.  For the second straight season Kasler and Pfeifler helped the Tigers get to the NCAA tournament and beat Winthrop in the first round.

Brittany Lindl from Panama City and a freshman at the University of Tennessee compiled a singles record of 22-14 including a first round singles win in the NCAA tournament. Tennessee was ranked #34 at season’s end with a team record of 13-12. Lindl was also named to the ITA Scholar Athlete list.

Erin Stephens from Santa Rosa Beach and a junior at Ole Miss helped lead the Rebels to their sixth straight and 17th overall NCAA appearance. She finished the year with an overall singles record of 16-12 helping her team to a first round win over Texas Tech in the NCAA tournament. Erin also earned ITA Scholar-Athlete honors and was named to the SEC Academic Honor Roll. Ole Miss was ranked #28 with a 14-10 record for the season.

Reece Acree, a freshman from Pensacola at the University of Central Florida (UCF) went 4-4 in singles play and finished with a 3-1 doubles record. UCF finished the season at 12-9 ranked #69.

Will Neuner, a junior from Pensacola at Florida Atlantic University (FAU) was 13-9 at playing mostly #1 and 2 singles. He compiled at 12-6 record in doubles mostly at the #1 position. FAU was 10-11 for the season as a team.

John Nowak also played at FAU going 2-3 in singles and 1-2 at in doubles. Nowak is a sophomore from Pensacola.

Bianca Biglione, a freshman from Panama City Beach also played at FAU. She had a terrific16-9 record in singles and a 10-7 mark in doubles. The FAU women’s team also was 10-11 for the season.

Lucy McLaurin, a freshman from Pensacola played for Mars Hill University. McLaurin went 9-10 in singles and 13-6 at #1 doubles. The Lions team was 9-10 overall.  The local area tennis coaches and teaching professionals who trained these student athletes as juniors should be quite proud of their charges athletic and academic achievements in college.

Roger Scott Tennis Center in Pensacola will be one of two sites in Florida to try the new USTA 40 Point Tournaments. The tournament will be held in one day from 9AM to 4PM  on Saturday, July 26, 2014.

Sign up at Roger Scott front desk or enter online at TennisLink. Food and drink provided.

The tournament should be listed on TennisLink by July 18th or 19th.